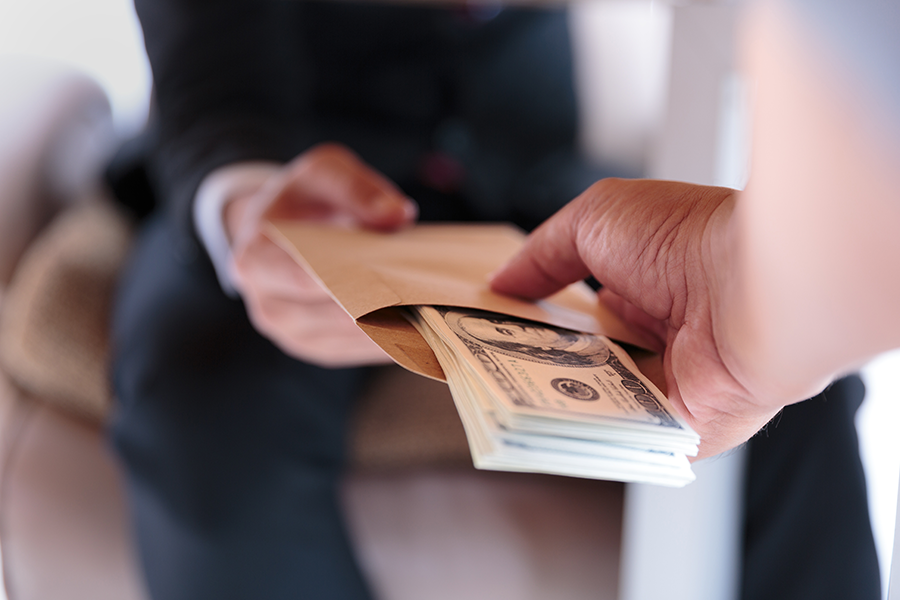 Legal Definition: Every person who gives or offers any bribe to any executive officer in this state, with intent to influence him in respect to any act, decision, vote, opinion, or other proceedings as such officer, is punishable by imprisonment in the state prison for two, three or four years, and is disqualified from holding any office in this state. (PC 67).

PC 641.3 deals with Commercial Bribery, in other words, bribery of a non-executive official. Any employee who solicits, accepts, or agrees to accept money or anything of value from a person other than his or her employer, other than in trust for the employer, corruptly and without the knowledge or consent of the employer, in return for using or agreeing to use his or her position for the benefit of that other person, and any person who offers or gives employees money or anything of value, under those circumstances, is guilty of commercial bribery.

For a person to be convicted of a violation of PC 67, the prosecution must prove the following:

1. You gave/offered a bribe to an executive officer in this state or someone acting on the officer’s behalf;

2. You acted with the corrupt intent to unlawfully inﬂuence that officer’s official act/decision/vote/opinion.

A Bribe means something of present or future value or advantage, or a promise to give such a thing, that is given or offered with the corrupt intent to unlawfully inﬂuence the public or official action, vote, decision, or opinion of the person to whom the bribe is given.

A person acts with corrupt intent when he or she acts to wrongfully gain ﬁnancial or other advantages for himself, herself, or someone else. The official act/decision/vote/opinion/proceeding, that you sought to inﬂuence must have related to an existing subject that could have been brought before the public officer in his or her official capacity. It does not have to relate to a duty speciﬁcally given by statute to that officer. An executive officer is a government official who may use his or her own discretion in performing his or her job duties.

The bribe itself does not need to be accepted, meaning you can be caught in a sting operation under this section. The crime is committed once the bribe is made, regardless of whether it was accepted or not. Offering a bribe does not require speciﬁc words or behavior, as long as the language used and the circumstances clearly show an intent to bribe. You can also be found guilty under this section to accept the bribe or request a bribe, not just offering a bribe.

A violation of Bribery will depend on what subsection your case or charge falls under.

1. PC 67 Bribery of a state executive officer: This is a felony charge. If you are convicted under this section, you could be sentenced to State Prison for up to two, three, or four years. You would be required to serve 50% of that time in custody. You would also be disqualified from holding any office in California.

2. PC 68 An officer asking for or receiving a bribe: This is a felony charge. If you are convicted under this section, you could be sentenced to State Prison for up to two, three, or four years. You would be required to serve 50% of that time in custody. You would also be disqualified from holding any office in California.

As with any other offense, when Entrapment happens, it must involve the criminal design coming from the police authority and not from you. For example, if you are attempting to bribe a District Attorney to avoid your loved one being charged with a crime, then it would be hard to show you were Entraped into doing this crime. However, if you attempt to request that your loved one not be charged with a crime, and the District Attorney tells you that can make “this all go away” if you help them, and pressure you to pay them $10,000 to dismiss the case, then you were Entrapped.

A criminal conviction can have long-lasting effects on your future, specifically, if you are seeking permanent status in the United States through Immigration or for people holding Professional Licenses. Theft crimes can be crippling to peoples’ futures because of the added aspect of dishonesty. I have handled many of these cases, and I can help you or your loved one have hope to get through these difficult times. Our PC 67 Ontario attorney has successfully defended numerous cases involving Bribery charges under sections PC 67, PC 68, and PC 641.3. The initial consultation is free and we are available to answer your questions 24/7. Call the Inland Empire Criminal Defense today at 909-939-7126! Located in Ontario, CA.