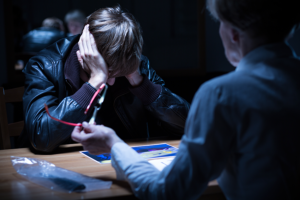 Why would an innocent person ever confess to a crime? How could a complete crime-free person, tell police they committed a crime that they didn’t in fact commit? This happens more often than you think, and it happens through overbearing police conduct. A coerced confession is a confession to a crime, that comes out involuntarily by overbearing police conduct. It is overborne because, but for the police’s outrageous conduct, you would have not otherwise confessed to the crime you are being accused of.

Generally speaking, a person who confesses to a crime forced out of them by police conduct, would be inadmissible to be used against them in Court. This makes logical sense, if the police force a confession out of a person illegally, it should not be able to be brought into Court to be used against them. Generally, this can happen during police interrogations where police, believing they have their person, do whatever it takes you to make you confess. They can do this through physical abuse or psychological abuse. Police can lie to you. They can claim there are witnesses that saw you at the scene, that another person has blamed you as the one responsible, whatever it takes to get you to confess. These are generally considered normal police conduct, but there are limits to what they can and cannot do. When they go too far, they end up with a coerced confession.

Sometimes police can make a person believe that if they work with them, if they confess, they can go home, or that they won’t go to jail. They pretend that all they are looking for is the “truth”, but the truth to them is only a confession by you, and nothing more. They can claim that the victims just want the confession. They can make you feel bad for something or someone else, even if you did nothing. This is what they are trained to do. However, an explicit promise of leniency by police, that you are going to get a shorter sentence, that you won’t get charged or arrested, or that the Judge or DA will go easy on you, can easily become a coerced confession if overdone by police.

An example of this could be in a Rape case, where through police conduct, they convince you that maybe you were mistaken, maybe the person said “no”, and maybe they continued based that “no”, and committed rape. They play good-cop with you, pretend they get it and understand that sometimes things happen. Don’t be fooled, this is a technique to get you to confess or admit to small changes that lead to you getting charged with a crime you didn’t commit. Police can get here by befriending you, or even persuading you through deception and lies on what evidence they may or may not have. All of these factors, added in when you are stuck in interrogation for hours on end, can work to destroy you psychologically enough to say whatever it is police want to hear.

A common example police use on people, is they present you with a catch-22. You either confess you are guilty, or you are a monster. This is because there is not a scenario where you can be innocent of a crime. You are either guilty and admit it, or you are a monster for not admitting it. The only way you can be a good person is to admit to the crime. They deprive you then of food, water, sleep, bathroom breaks, and they bully you into feeling like a horrible person if you do not give them what they want. Deception and persuasion are allowed so long as the tactics they are doing do not proximately cause a confession by you.

To determine whether police have gone too far in their tactics, a Judge would determine the totality of the circumstances in what police did, and if all factors add up to an involuntary confession by you, then your confession can be thrown out of your case. This would not dismiss your case, but it makes the Prosecutor’s case much harder to prosecute you, and more likely your Ontario Criminal Defense Attorney can seek a dismissal.