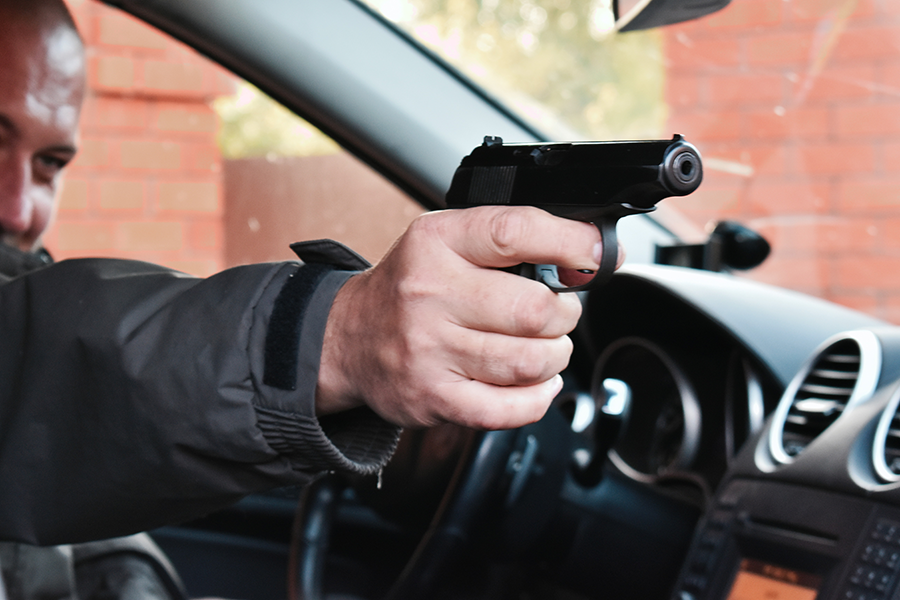 To be found guilty under PC 26100(b) the prosecution must prove that you intentionally:

1. You were the driver or owner of a vehicle;

2. You permitted someone to shoot a firearm from the vehicle;

3. You knew that you were permitting someone to shoot a firearm from the vehicle;

4. The other person shot the firearm from the vehicle.

To be found guilty under PC 26100(c)/(d) the prosecution must prove that you intentionally:

1. You willfully and maliciously shot a firearm from a vehicle;

2. You shot the firearm at another person, not in the vehicle;

3. You did not act in self-defense.

This section not only penalizes the shooter in these scenarios but also the driver who allows it to happen. Someone commits an act willfully when they do it willingly or on purpose. Someone acts maliciously when they intentionally do a wrongful act or when they act with the unlawful intent to disturb, defraud, annoy, or injure someone else. Also, if you allow a person in your car to commit the shooting in your car as the owner, you do not need to be present during the shooting to be charged under PC 26100(a).

A ﬁrearm is any device designed to be used as a weapon, from which a projectile is discharged or expelled through a barrel by the force of an explosion or other form of combustion. An example is allowing your friend to borrow your car in order to commit a drive-by shooting. Knowing that the purpose of borrowing is to use it for a drive-by shooting is how you can be found guilty under this section. If you are the other drive in the back of the vehicle, or the person who borrows the vehicle and commits the actual shooting act to another person, you can be found guilty under PC 26100(c)(d). It can still be charged whether the person being shot at is in another vehicle or not in a vehicle at all.

Depending on what section of PC 26100 you are charged with, you could face a myriad of punishments.

1. PC 26100(a) Allowing a person to bring a firearm in your vehicle: If you are convicted under this section, you could be sentenced to up to 6 months in County Jail.

2. PC 26100(b) Allowing someone to shoot a firearm from your vehicle: This is a wobbler offense, where you can be charged with this section as a misdemeanor or as a felony offense. If you are convicted of this charge as a felony, you could be sentenced up to 16 months, 2 or 3 years in State Prison. If you are convicted of this section as a misdemeanor, you could be sentenced to up to one year in County Jail.

3. PC 26100(c) Discharging a firearm in a vehicle: This is only a felony offense in California. If you are convicted of this section, you could be sentenced to upwards of 3, 5, or 7 years in a State Prison.

You would be required to serve 50% of this time in custody. The fines in this section can range from $1,000 up to $10,000, depending on the section you are convicted of. If you are convicted of this section as a misdemeanor, you would also receive a 10 years ban on your ability to own or possess a firearm. If you receive a felony conviction, you would receive a lifetime ban from ever owning or possessing a firearm.

This is not a strike offense under the California Three Strikes law, and it is not a Sex Offense under PC 290. You could also face a loss of your Professional License if convicted, and if you are not a legal resident, you would face Deportation in Immigration Court since the offense is deportable, in that it is a crime using a firearm.

If a person borrows your vehicle and commits a drive-by shooting, then it would be up to the Prosecutors to prove that you had knowledge that the purpose of borrowing the vehicle was to commit the drive-by shooting. If, for example, your friend asks to borrow your car to go see a friend, and then commits the act, then you would not be able to be found guilty of this charge. Failing to show you have knowledge of the purpose of the friend borrowing your vehicle for a drive-by shooting, would eliminate a necessary element of the crime, and there would be insufficient evidence to find you guilty of the crime.

If you have a firearm in the vehicle, and the gun discharges by accident and you happen to hit another person, then you can defend against this charge as insufficient evidence as well. In that scenario, it would be harder for the prosecution to show that you willfully and maliciously discharged the firearm if it was discharged by mistake. Showing malfunctions in the firearm, and other witness testimony, it can help to show that there is insufficient evidence that you were guilty of this crime.

A conviction for PC 26100 can land you in Prison with a felony on your record for life, and a ban on owning a firearm for up to 10 years or even life. This charge is most commonly charged as a felony offense, meaning you could face years in State Prison if you do not take this charge seriously. Our Ontario PC 26100 attorney has successfully defended hundreds of people charged with firearm crimes under PC 26100. Call your local Ontario Criminal Defense Attorney today at the Inland Empire Defense 909-939-7126. Located in Ontario.