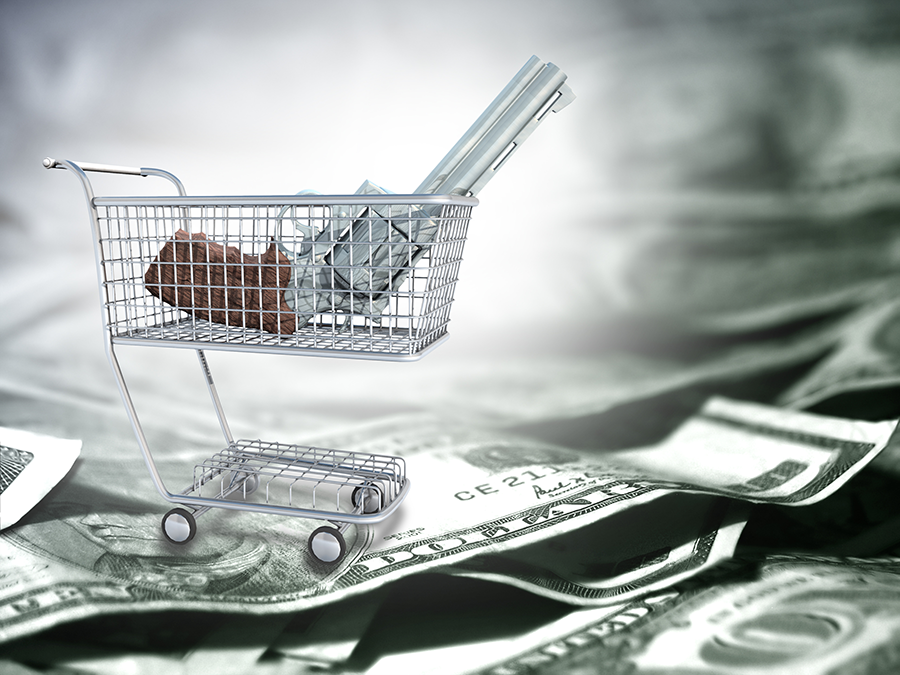 Legal Definition: (a) No person shall sell, lease, or transfer firearms unless the person has been issued a license to do so.

PC 26505: This does not apply to the sale, lease, or transfer of any firearm by any of the following:

(a) A person acting pursuant to operation of law.

(b) A person acting pursuant to a court order.

(c) A person acting pursuant to the Enforcement of Judgments Law.

(d) A person who liquidates a personal firearm collection to satisfy a court judgment.

To be found guilty under PC 26500, the prosecution must prove that:

First, we must define what is considered a “firearm” or “gun” under this section for the purposes of illegal sales. It is any device, that is designed to be a weapon, where a projectile is expelled through a barrel by the force of an explosion or some form of combustion. Typical examples of firearms are pistols, revolvers, shotguns, handguns, rifles, rocket launchers, among others. A pellet gun, BB gun, and antique (unloaded) firearms do not count as firearms under this section.

In order for a sale of a firearm to be done in California, it must be sold through a licensed gun dealer. But, having a license to sell firearms does not mean you can sell all firearms if they are illegal or forbidden from being owned within the state where you are a licensed seller. You can also be charged under this section if you at one point had a valid license, but it has since lapped (expired), or fail to maintain any licensing requirements from the state. A common example of this would be selling a firearm to a person who either does not pass a background check or does not complete one. This can because to lose your license to sell firearms.

This can also work to your advantage, as many times a person who purchases a firearm from a non-dealer could have obtained the firearm through theft, or it could be a firearm used in a crime. This subjects you to prosecution for having a stolen firearm, or possibly worse.

You are also ineligible if you are forbidden by law, based on a specific prior conviction, or having a prior felony conviction, of obtaining a license to sell firearms. This includes even if you obtained the felony conviction after you already had the license – it would then be revoked.

A conviction under PC 26500 is a straight misdemeanor offense. If you are to be convicted of this charge, you could be sentenced up to six months in a County Jail. You would be required to serve at least 50% of that time in custody. A small caveat with this crime is that you are charged and could be punished for each firearm you have sold. Meaning ten sales can lead you to ten charges under this section. You can also face a maximum fine of up to $1,000.

This is not a strike offense under the California Three Strikes law, and it is not a Sex Offense under PC 290. However, if you are dealing with attempting to obtain citizenship, any charge involving firearms is held heavily against you in Immigration Court and can be the cause of Deportation proceedings if convicted of this charge. This could also affect your professional license – as it infers an inability to follow instructions and laws by not being a licensed gun dealer.

Entrapment is a common defense used here as if your only reason for selling a firearm came by an overwhelming police contact, that convicted you to sell them a firearm without a license, it can be viable to your defense. This can happen if an undercover police officer sees your firearm and inquires into purchasing it. You are not intending to sell the firearm, but they prod you to do so, and eventually, the price becomes too big to pass up, and you sell it. If that police contact overwhelmingly motivated you from otherwise not intending to sell that firearm to them, to actually selling it, you can possibly use Entrapment as a defense.

Another aspect of this case is that so long as a licensed gun dealer is involved in the transaction, even if they are involved in a broke type of role, then the sale is legal. It is only a crime if there are no licensed gun dealers involved in the transaction at all. This of course would mean if you worked at a gun shop that sold guns, you would not personally need to be licensed to sell guns, so long as the owner or someone in charge was and took part in the sales.

It is important to properly defend yourself in case involve charges under PC 26500. As mentioned above, you are charged for each firearm you sell, which can elevate a simple misdemeanor charge, to multiple charges and thousands of dollars in fines. Not only this, but you could face the fears of immediate Deportation if you are not a legal resident and get convicted under this section. Our Ontario PC 26500 attorney has dealt with many firearms related offenses, including violations under PC 26500. Call your local Ontario Criminal Defense Attorney today at the Inland Empire Defense 909-939-7126. Located in Ontario.