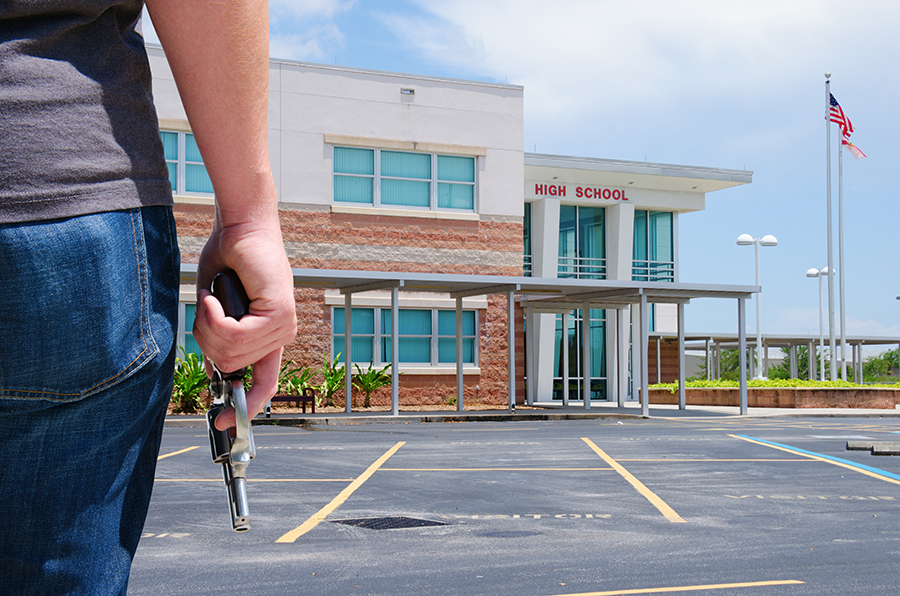 Legal Definition: Any person who possesses a firearm in a place that the person knows, or reasonably should know, is a school zone, as defined in paragraph (4) of subdivision (e), shall be punished…

To be found guilty under PC 626.9, the prosecution must prove that you intentionally:

Because it is possible for a person to own and possess a firearm, this law does not extend to certain people and settings inside of School Zones. For example, this does not extend to a person’s home, business, or otherwise private property that is not connected to, or part of the school. This also does not extend to people who have unarmed firearms that can be concealed and are in a locked box or in a locked trunk of your vehicle. A School Zone is an area in or on the grounds of a public, or private school that provides instruction to kindergarten or grades 1 to 12, or within 1000 yards of that area.

You can still be charged with this crime if the firearm is unloaded, as well if it is loaded or discharged in the Zone area. A firearm is a device that is designed to be used as a weapon, from which is expelled through a barrel, a projectile by the force of an explosion or other form of combustion.

Having possession of a gun in a Gun Free Zone is a felony charge. You could be sentenced to State Prison for upwards of 2, 3, or 5 years if any of the following apply:

If, while on School Grounds, you discharge the firearm, you can be sentenced to three, five, or seven years in a State Prison.

However, if none of the above applies, then this charge becomes a wobbler, meaning you can be charged with this crime as a misdemeanor as a felony. If you are convicted of this charge as a felony, you could be sentenced to upwards of 16 months, 2 or 3 years in State Prison. If convicted of this charge as a Misdemeanor, you could be sentenced to County Jail for up to one year. You would be required to serve 50% of that time in Custody. You would also lose your 2nd Amendment Right to Own and Possess a Firearm with a conviction under this section.

This is not a strike offense under the California Three Strikes law, and it is not a Sex Offense under PC 290. You could also face a loss of your Professional License if convicted and if not a legal resident, could face Deportation in Immigration Court because this charge involves a firearm.

To show that there is insufficient evidence to be able to prove you guilty of this crime, you would need to have shown that the required elements above have not been proved by the Prosecution. For example, if you only possess a broken bb gun, you would not be able to be found guilty under this section. There could be other crimes you could be convicted of for bringing the bb gun, other than under PC 626.9. Another way to find insufficient evidence is to determine if you are actually within 1000 feet from a School Ground, given how fact-specific that can be. Not only is the distance a problem for the Prosecution to show, but that you reasonably knew, or should have known you were in a School Zone.

Also, if police were to violate your rights, by committing an illegal search, then it’s possible the evidence of the firearm in a School Zone can be thrown out, due to a violation of your rights under the 4th Amendment. There are also a number of exemptions for this charge as well, like for example, there is already a gun range at a School in a School Zone, would be an exemption for you to be prosecuted under this section.

A conviction for PC 626.9 can land you in Prison with a felony on your record for life, and a permanent loss of your ability to ever own or possess a firearm. Upon a conviction under PC 626.9, any possession of a firearm would be a new law violation under PC 29800. Our Ontario PC 626.9 attorney has successfully defended hundreds of people charged with firearm crimes under PC 626.9. Call your local Ontario Criminal Defense Attorney today at the Inland Empire Defense 909-939-7126. Located in Ontario.