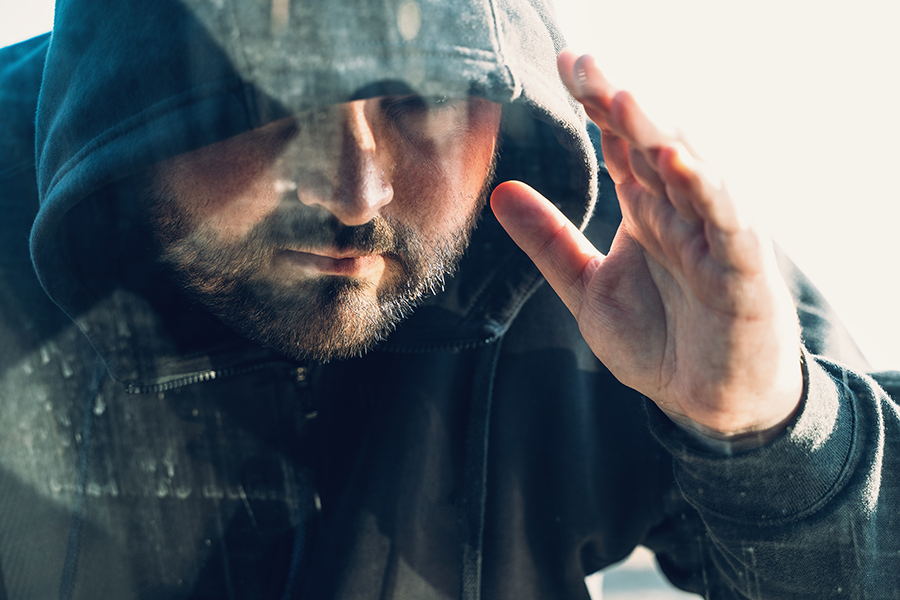 Legal Definition: every person…who, while loitering, prowling, or wandering upon the private property of another, at any time, peeks in the door or window of any inhabited building or structure, without visible or lawful business with the owner or occupant…is guilty of disorderly conduct.

To be found guilty under PC 647(i), the prosecution must prove that:

1. You delayed, lingered, prowled, or wandered on the private property of someone else;

2. When you were on that property, you did not have a lawful purpose for being there;

3. When you were on the property, you peeked in the door or window of any inhabited building or structure.

When the code indicates you did not have a lawful purpose to be present, it doesn’t mean you necessarily intended to commit a further crime, such as Rape, it just means that you were not legally allowed to be present at that time. In other words, at the least, you were Trespassing on another person’s property that was not your own. A building/structure is inhabited if someone uses it as a dwelling, whether or not someone is inside at the time of the alleged peeking. Even if the person leaves their home, if you are peeking inside, you can still be charged under this section. A building/or structure is not inhabited if the former residents have moved out and do not intend to return, even if some personal property remains inside. As you can tell, this is a very fact-specific analysis.

This section exists to protect a person’s basic right to have a reasonable expectation of privacy in their homes. This type of charge is another way of looking at what people have commonly known as Stalking. Here, it involves being inside of a residence to “peep” on another person, such as a love interest, or possible love interest. There are other possible charges that can go with this section, such as Burglary if you are breaking and entering a dwelling at night, to commit a felony offense. Another way to look at this in more recent nomenclature is to “creep” on another person inside of their home.

A conviction under PC 647(i) is a misdemeanor offense. If you are convicted, you can be sentenced to County Jail for up to six months. You would be required to serve at least 50% of that sentence in custody. You can also be subject to Criminal Protective Orders forbidding you from going near the victim’s home, Victim Restitution as well as fines and fees upwards of over $1000.

This is not a strike offense under the California Three Strikes law, and it is not a Sex Offense under PC 290. However, if a Judge were to determine that the reason for your “Peeping” was based on an unnatural sexual desire, you could be forced to register. You could also face a loss of your Professional License if convicted and if not a legal resident, could face Deportation in Immigration Court.

To show that there is insufficient evidence to be able to prove you guilty of this crime, you would need to have shown that the required elements above have not been proved by the Prosecution. For example, if the house you are peeping inside is broken down and uninhabited and no person is living there or plans to return, then it cannot be considered a “home” under this section. In that sense, you cannot have been peeping on, and invading another person’s privacy, if there is no person that resides there.

Another possible element to attack would be to prove that you were not on the private property for an unlawful purpose, but rather, for lawful reasons. This helps protects workers at a home, who are presently doing repairs, from any possibility that it is determined that person is peeping on the current residents. Obviously, if a worker is hired to do work within a home, then their presence on the property is lawful, and therefore not a violation under this section.

Violating this section can land you in jail, prevented you from contacting that other person, and hefty fines and fees. It also does not look good on a criminal record, as an employer may hold a “peeping” charge against you and prevent you from getting that job that you want. Our Ontario PC 647(i) attorney has successfully defended numerous people under the Peeping Tom laws of PC 647(i). Call your local Ontario Criminal Defense Attorney today at the Inland Empire Defense at 909-939-7126. Located in Ontario.