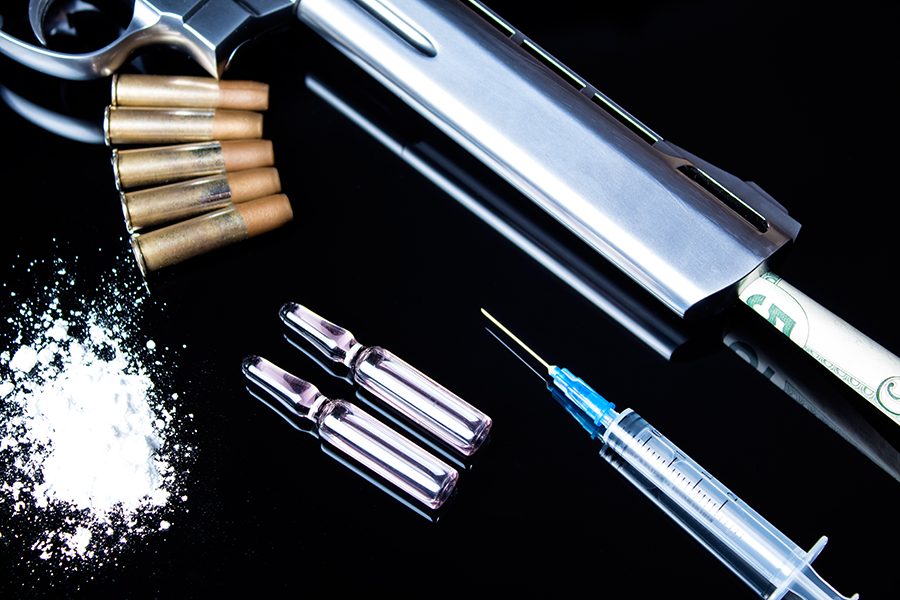 Legal Definition: “…a person who is armed with a firearm in the commission of a felony or attempted felony shall be punished by an additional and consecutive term of imprisonment…”

To find you have committed the enhancement under PC 12022, the prosecution must show that:

This is not a criminal section you can be charged with, instead, it is an Enhancement. What that means, is that you must be first charged with a felony offense, and then thereafter you are also alleged to have committed this secondary violation by committing that felony with a firearm. A ﬁrearm is any device designed to be used as a weapon, from which a projectile is discharged or expelled through a barrel by the force of an explosion or other form of combustion. The firearm need not be loaded at the time of the felony, nor does it even need to be working order so long as it is designed to shoot and appears capable of shooting. For example, holding a banana that is painted black, is not a firearm, and would not be able to be enhanced under this section since it would not appear capable of shooting.

A person is armed with a ﬁrearm when that person:

Two or more people can be charged with being personally armed with a firearm at the same time. So long as it can be shown and determined that the firearm is readily available to more than one person accused. A “dangerous or deadly weapon” for purposes of this section is a weapon other than a firearm. This is not the same as the use of a firearm during a felony, that can be found here.

This enhancement is not a separate charge but is instead added to your charges as enhancement offenses. The additional time you could face under this section depends on several different factors.

These sentences would add to your underlying felony offense. For example, if you are charged with first-degree Robbery, you could face a maximum punishment of up to 9 years in a State Prison. But, if you used a dangerous or deadly weapon or firearm during that crime, you could face an additional one year in custody for that offense. Again, however, this is simple possession of a firearm during the felony, if you point the firearm at a person in order to commit the robbery, then you would be facing a more serious enhancement under PC 12022.5.

Drug sales are the only felony drug cases in California since Prop 47. The most common offenses are HS 11351 Possession For Sale and HS 11352 Transportation or Selling Drugs that are associated with this enhancement, but that is not an exhaustive list of the drug offense felonies in California where this enhancement can be added.

The defenses to enhancements are quite a bit different than to regular criminal charges. Here, a common defense can be that you were not, for example, in the commission or attempted commission of a felony offense. If there is no felony offense, then you cannot have a gun enhancement added your case, and that would be found “not true” by a Court. If you were armed while Driving Under the Influence with a firearm, then this enhancement would not apply, since this was only a misdemeanor DUI offense.

It can also work as a defense if you did not possess or even know of the firearm that was present during the felony, but you only admitted to possession based on a Coerced Confession by police. Let’s say your friend had what may have been a weapon, but you didn’t know about it, and police later convince you that you not only knew about it, but you were the one who possessed it. They promise leniency in order to get your confession. If it can be shown that your admission to this enhancement was coerced, then you would be able to defeat that in your case.

There also could be an issue later when you are arrested by police, if the police violated your rights guaranteed under the 4th Amendment. If, for example, police were to stop you on a street, simply because of your race, but lacking probable cause to detain or arrest you, then, if later a firearm is recovered on your person, your Criminal Defense Attorney could possibly argue that this was an illegal stop, and they can file a motion under PC 1538.5 to have the gun evidence thrown out of your case. This would likely not dismiss your case if there is still a felony, unrelated to the gun you committed, but it could act as reducing your possible sentence for the better, which could help in possible Plea Bargaining as well.

A gun enhancement can make a serious case even more serious. As indicated, if there are certain drug offenses being committed, a firearm present on your person can land you an additional five year Prison term, which is sometimes even longer than what the felony Drug case would have been without it. It’s the type of enhancement DA’s like to add to cases to make the case easier to win for their side, and to scare you into thinking there is no hope. There is always hope, if you find the right Attorney to protect your rights, and fight this Enhancement. Our Ontario PC 12022 attorney has successfully defended hundreds of people charged with firearm enhancements under PC 12022. Call your local Ontario Criminal Defense Attorney today at the Inland Empire Defense 909-939-7126. Located in Ontario.