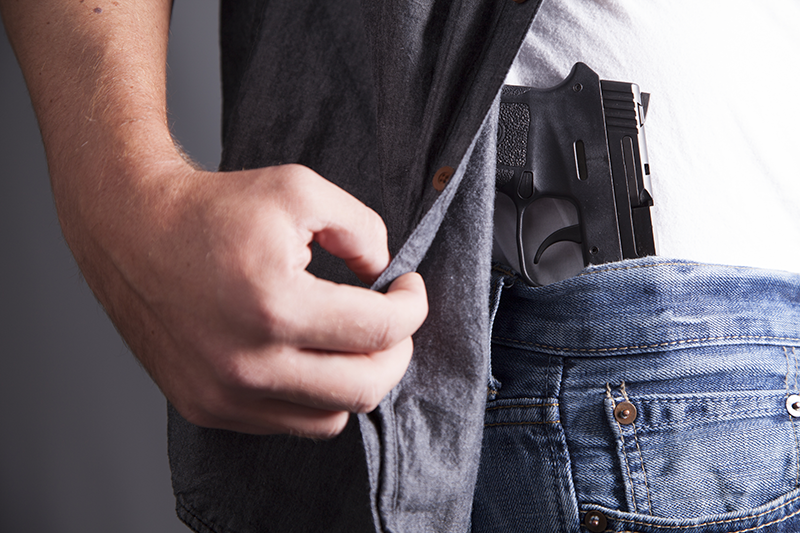 I. California Penal Code 25400(a): Carrying a Concealed Weapon or Firearm

Legal Definition: A person is guilty of carrying a concealed firearm when the person does any of the following:

(1) Carries concealed within any vehicle that is under the person’s control or direction any pistol, revolver, or other firearm capable of being concealed upon the person.

(3) Causes to be carried concealed within any vehicle in which the person is an occupant any pistol, revolver, or other firearm capable of being concealed upon the person.

For a person to be convicted of a violation of PC 25400(a), the prosecution must prove the following:

1. You carried on your person a ﬁrearm capable of being concealed on the person;

2. You knew that you were carrying a ﬁrearm;

3. It was substantially concealed on your person.

As shown above, if the above elements are met, and a person is also in a vehicle, then they are also guilty under this section.

A ﬁrearm does not need to be in working order if it was designed to shoot and appears capable of shooting. Firearms carried openly in belt holsters are not concealed.

This charge is not considered a strike offense under California’s Three Strikes Sentencing Law. You would also be required to pay fines and fees, and could potentially lose your right to own or possess a firearm in the future.

It is not a defense to this charge if you have a gun on you, but it isn’t your gun. The basis of the charge is that you possess a concealed gun or firearm, without a permit to possess the gun. This also could be problematic if the gun is not yours, and it is found out that the gun is stolen. However, a toy gun, for example, would not be a concealed firearm, even if it is not a “working gun”, because it was never a gun, it was a toy. Likewise, if you believe the gun is a toy gun, then you could not be found guilty under this section.

A criminal conviction can be devastating to your life and your future. In addition, the fines and fees associated with a conviction can cripple you. Plus, you face the strong likelihood of losing your gun privileges altogether. But not all hope is lost, many times these charges can be reduced or dismissed, even though Differed Entry of Judgment, depending on your case, and what attorney you choose to represent you. Our PC 25400 Ontario criminal defense attorney has successfully defended numerous cases involving PC 25400 and other firearm offenses. The initial consultation is free and we are available to answer your questions 24/7. Call the Inland Empire Criminal Defense today at 909-939-7126! Located in Ontario, CA.