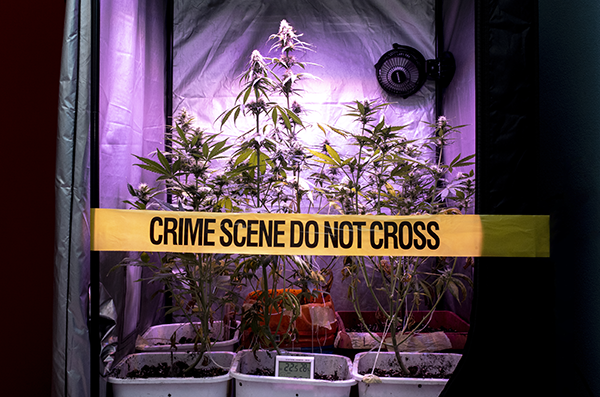 Legal Definition: (a) Each person who plants, cultivates, harvests, dries, or processes cannabis plants, or any part thereof, except as otherwise provided by law, shall be punished …

To be found guilty under HS 11358 the prosecution must prove:

1. You unlawfully planted/cultivated/harvested or dried/processed one or more marijuana plants;

2. You knew that the substance you planted/cultivated/harvested, or dried/processed was marijuana.

Marijuana means all or part of the Cannabis sativa L. plant, whether growing or not, including the seeds and resin extracted from any part of the plant. It also includes every compound, manufacture, salt, derivative, mixture, or preparation of the plant, its seeds, or resin. A person can be found guilty under this section if you are the landowner/landlord and have a tenant or person on your property cultivating marijuana if you have knowledge that they are doing so. In other words, “if [the landowner] knew of the existence of the illegal activity, her failure to take steps to stop it would aid and abet the commission of the crime. This conclusion is based upon the control that she had over her property.” (People v. Null, 1984, 157 Cal App.3d 849, 852).

Under Proposition 64, which legalizes Marijuana possession, it now changes what a person is allowed to have for sale. Under the new law, so long as you are 21 years of age or older, and you are growing 6 marijuana plants or fewer for recreational use, then you cannot be found guilty under this section. This, of course, means you can be charged under this section if you are under 21 years of age, or grow more than 6 plants for recreational use.

If you are under 21 years of age, the charge is only an infraction so long as you are cultivating less than 6 plants for recreational use, with a penalty of a maximum fine up to $100.

A charge under HS 11358, unless stated above, is a misdemeanor offense. If you are convicted of this charge you could be sentenced to upwards of six months in County Jail. You would be required to serve at least 50% of that time in custody. You could also be subject to a fine of up to $500 for this charge. In addition, all marijuana, as well as the tools used to cultivate the marijuana in your home, would all be confiscated by police as part of their investigation.

This is not a strike offense under the California Three Strikes law, and it is not a Sex Offense under PC 290. You could also face a loss of your Professional License if convicted, and if you are not a legal resident, you would face Deportation in Immigration Court since the offense is deportable, in that it is a crime involving drug use.

You can also get evicted from your apartment if your landlord finds out about your arrest and the cultivation you were doing in your home without their consent.

There are certain exceptions under this criminal section for people who are given medical marijuana privileges. In those circumstances, patients and their caregivers may cultivate up to: 6 mature marijuana plants, 12 immature plants, or a greater amount consistent with the patient’s needs so long as they are reasonable. If you are medically proscribed marijuana from a doctor, then you have different restrictions and benefits in terms of what you can possess in your home for marijuana cultivation.

As explained, if you know of a tenant in your residence that is cultivating marijuana and you do not stop them, you, as a landlord, could be convicted of aiding and abetting that person’s cultivation. But, if you are a roommate, and it is not your marijuana, you cannot be found guilty under this section. You do not have the same authority as a roommate to force your roommate to stop, so if it is not your hash, you cannot be found guilty of cultivating it.

Another defense can be if police violated your rights against an unlawful Search and Seizures. This can happen if police were to enter your residence without a warrant or probable cause to search for marijuana plants. A violation under this section would allow your Ontario Criminal Defense Attorney to file a Motion to Suppress Evidence under a PC 1538.5 motion to get the evidence suppressed and thereafter it cannot be used against you in your case.

A Charge under this section can result in an unwanted criminal conviction that can last a lifetime. It can affect your future school, job, and residence if convicted under this section. Our Ontario HS 11358 attorney has successfully defended hundreds of people charged with drug crimes under HS 11358. Call your local Ontario Criminal Defense Attorney today at the Inland Empire Defense 909-939-7126. Located in Ontario.