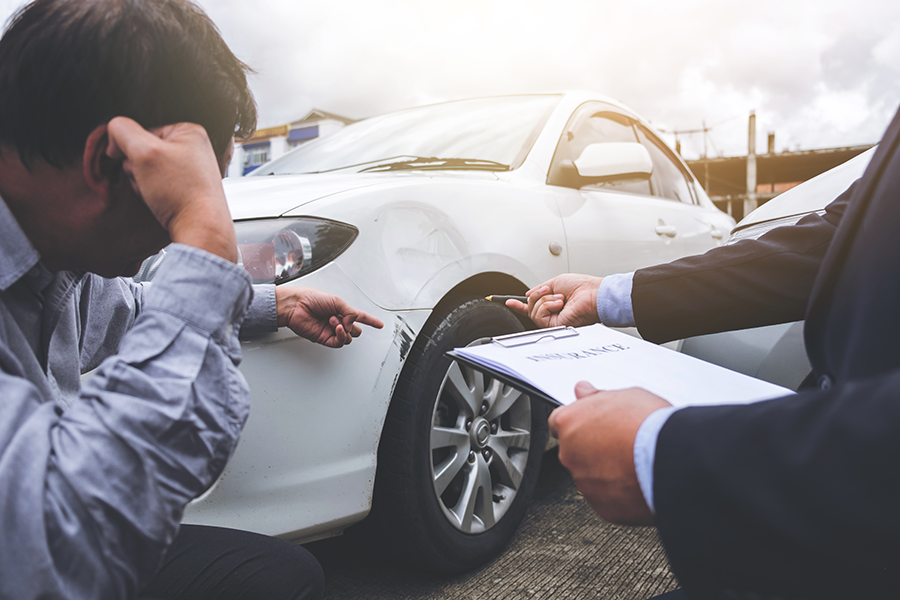 Legal Definition: Every person who willfully injures, destroys, secretes, abandons, or disposes of any property which at the time is insured against loss or damage by theft, or embezzlement, or any casualty with intent to defraud or prejudice the insurer, whether the property is the property or in the possession of that person or any other person, is guilty of defrauding an insurer. (PC 548(a)).

For a person to be convicted of a violation of PC 550, the prosecution must prove the following:

1a. You presented/caused to be presented a false or fraudulent claim for payment for a loss or injury;

1c. You prepared/made/signed or subscribed to a document with the intent to present or use it/allow it to be presented to support a false or fraudulent claim;

1d. You made/caused to be made a false or fraudulent claim for payment of a health-care beneﬁt;

1e. You presented a claim for a health-care beneﬁt that was not used by or on behalf of the person named in the claim;

1f. You claimed payment for undercharges for health-care beneﬁts for a speciﬁc person without presenting for  reconciliation, at that same time, any known overcharges for beneﬁts for the same person;

2. You knew that the claim was false or fraudulent;

3. When you did that act, you intended to defraud.

Someone intends to defraud if he or she intends to deceive another person either to cause a loss of money/goods/services/something else of value, or to cause damage to, a legal, ﬁnancial, or property right. It is not necessary that anyone actually is defrauded or actually suffer a ﬁnancial, legal, or property loss as a result of your acts, the crime is committed when you have the intent to do so and attempt the act. A person’s claim makes or presents a claim for payment by requesting payment under a contract of insurance for a loss/ injury/health-care beneﬁt.

A claim for payment of a health-care beneﬁt includes a claim submitted by or on behalf of the provider of a workers’ compensation health beneﬁt deﬁned in the Labor Code. Conversion of property means interfering with someone else’s property, without authorization or justiﬁcation, and depriving the owner of use and possession of the property.

Another common example is crashing your car, and claiming you were in an accident or that the car was stolen, so you could collect on the insurance money associated with that car.

Insurance Fraud charges can be misdemeanors or felonies, depending on which charge you are being charged with. PC 550(a)(6) or 550(a)(8) are wobbler offenses, meaning they can be charged as misdemeanors or as felonies. If you are convicted of these charges as a misdemeanor, you could be sentenced to up to one year in County Jail. If convicted of these as a felony, you could be sentenced to upwards of 16 months, two or three years in State Prison. You would have to serve 50% of that time.

Most other Insurance Fraud charges, including PC 548, are felonies, where you could be sentenced to State Prison for upwards of two, three, or five years. You would have to serve 50% of that time in custody. No Insurance Fraud case as a felony is a Strike offense.

In addition to the above, if you are a provider that needs insurance to be paid for your services, you could lose out on obtaining any insurance for your work in the future and could only require out-of-pocket expenses. You would also be financially responsible for any over-payment that has not already been seized in your bank accounts, including additional and hefty fines and fees. These are also Crimes of Moral Turpitude, so any person with a professional license or any immigrant here on a temporary basis will be heavily harmed as this is a crime of theft and dishonesty.

For more specifics about what your exposure could be based on your charges, give us a call for a free case analysis about your situation.

Issues can typically arise under this section because of a Mistake of Fact or lack of intent defense. By these, if you are a big enough company that has billers handling your billing, there is a potential that they and honest mistakes as to the billing for people using your facility. You could submit wrong Tax ID numbers that require correction, and unbeknownst to you, receive twice the payment for services done.

It could also be that you had an honest, but good faith and a mistaken belief that work was done when it was not, and yet you billed for it. This does not work as well for people using auto insurance claims when they deliberately destroyed their vehicle or claimed it was, simply because it is a scheme that is done, on purpose, to make money off of insurance.

These charges are not usually charged as a single count, but usually multiple times. This can be because multiple claims of insurance are being disputed as having not been performed, or because multiple people were double-billed. This can end up being devastating and land you in prison for a very long time. There are also notable enhancements for money that is received which is over $500,000 and over $1,000,000, which adds time to your sentence. These are not charges to be dealt with lightly, I’ve handled hundreds of these cases and have helped many people caught in a tough spot, and I will help you or your loved one too. Our PC 550 Ontario criminal defense attorney has successfully defended numerous cases involving PC 550 and other fraud and theft offenses. The initial consultation is free and we are available to answer your questions 24/7. Call the Inland Empire Criminal Defense today at 909-939-7126! Located in Ontario, CA.