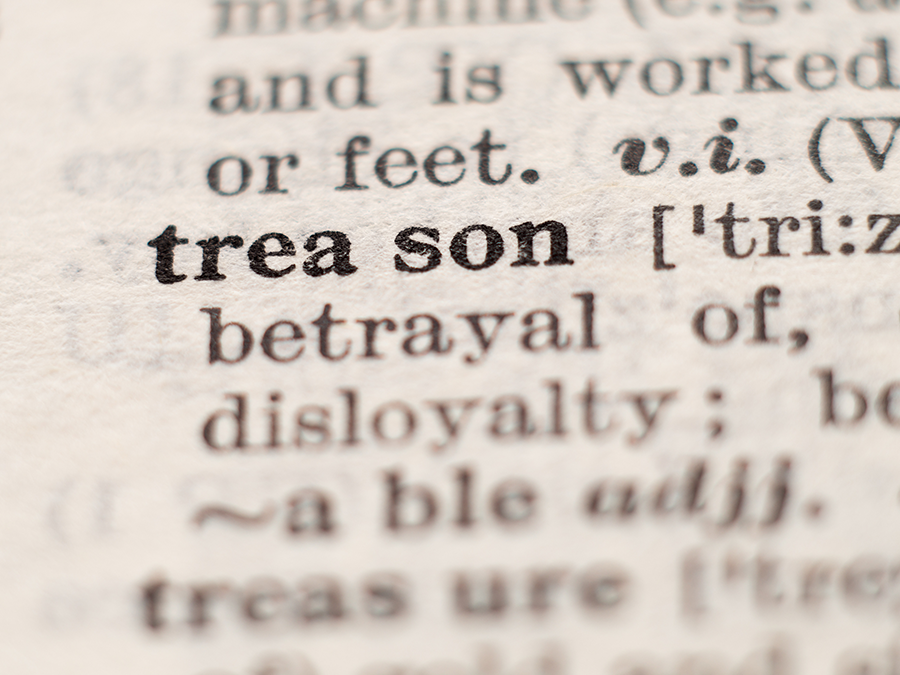 Legal Definition: “(a) Treason against this state consists only in levying war against it, adhering to its enemies, or giving them aid and comfort, and can be committed only by persons owing allegiance to the state. The punishment of treason shall be death or life imprisonment without the possibility of parole. The penalty shall be determined pursuant to Sections 190.3 and 190.4.”

To be found guilty of Treason in California, it must be shown that you owed some kind of loyalty to the State Government and that you willfully betrayed that loyalty by either levying war against the state government or giving assistance or support to the government’s enemies. This crime requires the intent to support an enemy, you cannot do that unintentionally or by accident. In addition, being forced by an enemy through threats of violence would not be sufficient for a treason charge.

This charge also requires that there be at least two witnesses who can demonstrate that you did something in furtherance of the treason offense. This is also known as an overt act. The overt act is done in order to complete the crime of Treason.

There are numerous factors that can determine your sentence for Treason, as defined under PC 190.3 and PC 190.4, but a Treason conviction can end up in a Death Sentence. It is the most serious charged crime, outside of Murder, and the only other offense that can lead to a death sentence.

This is a strike offense under the California Three Strikes law, but it is not a Sex Offense under PC 290. You could also face a loss of your Professional License if convicted, and if you are not a legal resident, you would face Deportation in Immigration Court since this offense is an aggravated felony under Federal Law, and is a crime involving moral turpitude.

You cannot be found guilty of a crime if you acted under Duress. A person acts under duress if, because of a threat or menace, you believed that you or someone else’s life would be in immediate danger if you refused a demand or request to commit the crimes. Here, your family could be kidnapped and threatened if you did not assist an enemy while working for the Government, your family would die. That threat would act as a defense to any Treason crime you committed.

As stated above, if there is no intent to commit Treason, then you cannot be found guilty of the crime. If the District Attorney fails to show that you intended to assist an enemy, there would be insufficient evidence to prove you guilty of the crime of Treason.

A conviction for Treason can end a person’s life. It is the most serious crime in California, outside of Murder. It is something that must be heavily defended against. Our Ontario PC 37 attorney has successfully defended many people charged with crimes throughout the entire Inland Empire. Call your local Ontario Criminal Defense Attorney today at the Inland Empire Defense 909-939-7126. Located in Ontario.