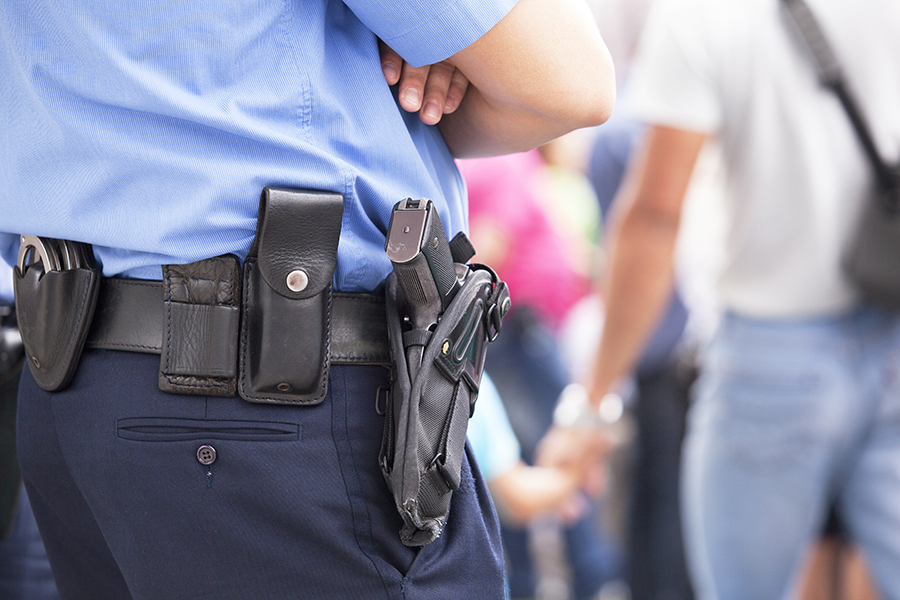 I. PC 148(d): Taking a Firearm from Police Officer

Legal Definition: “(d) Except as provided in subdivision (c) and notwithstanding subdivision (a) of Section 489, every person who removes or takes without intent to permanently deprive, or who attempts to remove or take a firearm from the person of, or immediate presence of, a public officer or peace officer, while the officer is engaged in the performance of his or her lawful duties, shall be punished by imprisonment in a county jail not to exceed one year or pursuant to subdivision (h) of Section 1170.

In order to prove a violation of this subdivision, the prosecution shall establish that the defendant had the specific intent to remove or take the firearm by demonstrating that any of the following direct, but ineffectual, acts occurred:

(1) The officer’s holster strap was unfastened by the defendant.

(2) The firearm was partially removed from the officer’s holster by the defendant.

(3) The firearm safety was released by the defendant.

(5) An independent witness corroborates that the defendant actually had his or her hand on the firearm and tried to take the firearm away from the officer who was holding it.

(6) The defendant’s fingerprint was found on the firearm or holster.

(7) Physical evidence authenticated by a scientifically verifiable procedure established that the defendant touched the firearm.

(8) In the course of any struggle, the officer’s firearm fell and the defendant attempted to pick it up.”

To be found guilty under PC 148(d) the prosecution must prove that you intentionally:

To have a specific intent to commit this act means you had intended to commit certain harm. In other words, it must be shown that you specifically intended to reach for or attempt to take the firearm. It is not enough to say that you resisted the officer, you must also attempt to get their firearm. You do not have to successfully take the gun to be charged under this section.

However, the police must be in the lawful performance of their duties. Therefore, if police are making an illegal arrest of you, then resisting them would not be a crime to resist. Clearly, that can come out in Court as your Attorney reviews the evidence to observe the circumstances of your arrest, so it wouldn’t be known to you immediately that it was an illegal arrest.  On top of this, you must also know that the officer is in the lawful performance of their duties. If the officer is not performing a lawful arrest or duty, then you can fight these charges later in Court. It is not enough, however, to claim you did not know the Officer was in fact a police officer, that does not act as a defense for you.

A conviction under PC 148(d) is a wobbler offense. This means that you can be charged under this section as a misdemeanor or as a felony offense. If convicted of a misdemeanor, you could be sentenced to up to one year in County Jail. You would be required to serve 50% of this time in custody. If you are convicted of this charge as a felony, you could be sentenced to County Jail Prison for up to 16 months or 2 to 3 years. You would also serve at least 50% of that time in custody. You would also lose your ability to own or possess a firearm for life with a felony conviction.

You also face a mandatory 10-year ban to own or possess a firearm, regardless of the charge is considered a misdemeanor or a felony, click here for more information.

This is not a strike offense under the California Three Strikes law, and it is not a Sex Offense under PC 290. You could also face a loss of your Professional License if convicted, and if you are not a legal resident, you would face Deportation in Immigration Court since this offense could be considered an aggravated felony under Federal Law.

Failing to show that the Officer is in the lawful performance of their duties, acts as a defense for your case. It is required that you had the specific intent to commit the offense of reaching for or grabbing the firearm from the officer. Failing to show that the officer was in the performance of their lawful duties, would mean there is insufficient evidence to prove that you committed this offense. Your Ontario Criminal Defense Attorney would therefore be able to argue that there is insufficient evidence to prove you guilty of this crime.

In California, you are allowed to use force against another person if you reasonably believe that you must use force to defend yourself against the threat of immediate harm. In other words, if you are threatened with an attack, you have the right to defend yourself, and fight back. Therefore, if the officer is shown to not be in the lawful performance of their duties, your attorney can also argue that you were not the initial aggressor, and instead of resisting arrest, you were acting in self-defense. To show that you were not resisting arrest, or that you were not the initial aggressor but rather defending yourself, it would act as a defense in your criminal case Court as well.

A conviction under PC 148(d) can have devastating impacts on your future, your job, and your immigration status. Not only that, but it’s a charge that can land you in jail, and the possible loss of your 2nd Amendment Rights to own or possess a firearm for life with a felony conviction, or for 10 years as a Misdemeanor in California. It is not wise to take charges in a criminal case lightly. Our Ontario PC 148(d) attorney has successfully defended many people charged with firearm crimes including under PC 148(d). Call your local Ontario Criminal Defense Attorney today at the Inland Empire Defense 909-939-7126. Located in Ontario.