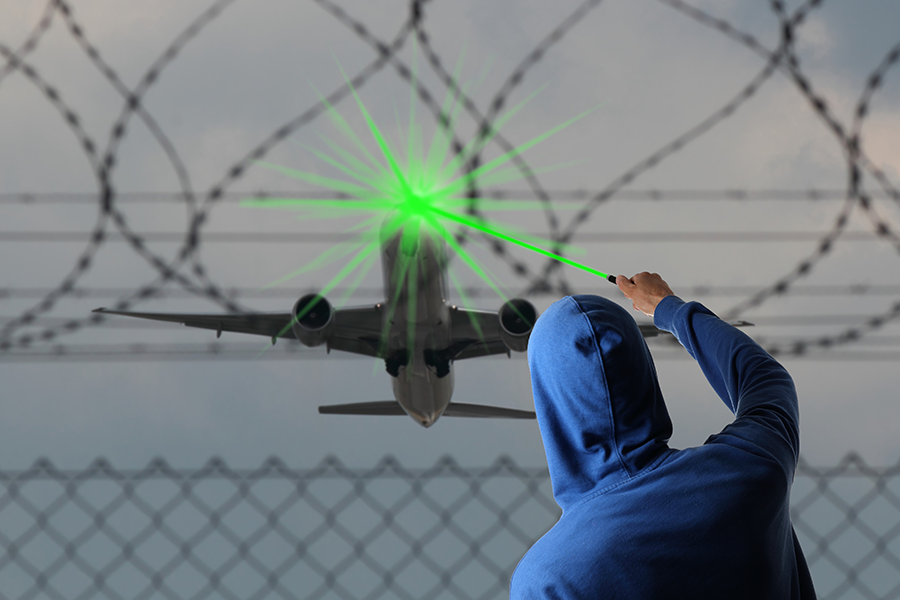 I. PC 248: Shining a Light into an Aircraft Laws

For a person to be convicted of a violation of PC 248 the prosecution must show that:

1. You interfered with an aircraft;

2. You willfully shined a light or another bright device of an intensity capable of impairing the operation of an aircraft.

Someone commits an act willfully when he or she does it willingly or on purpose. It is not required that he or she intend to break the law, hurt someone else, or gain any advantage. The most common example of this offense happens when a person shines a laser pointer at a helicopter (an aircraft low enough to be bothered by a shining light) and your light interferes with their ability to operate the aircraft. It doesn’t mean that the aircraft were to crash, it simply means any kind of interference, even slight. Even if this is done momentarily, if it is reported that it interferes with the aircraft’s ability to see, or move, then you can be charged under this section.

A violation under PC 248 is a misdemeanor only offense. If convicted, you could be sentenced to up to one year in County Jail. You would be required to serve at least 50% of that time in custody.

PC 248 is not a strike offense under the Three Strikes Law, and it is also not a charge requiring Sex Registration under PC 290. You could likely face a loss, suspension, or revocation of your professional license. You could also face immigration consequences if you are a non-US Citizen living in the United States, since this may be considered an aggravated felony under Federal Law.

This is a crime that requires you to act “willfully”. That would mean, that an accidental shining of light, such as a laser pointer, must be done with the intent to interfere with the aircraft. An accidental doing of this would act as a defense of this charge. Your Ontario Criminal Defense Attorney can argue that there is therefore insufficient evidence to prove you guilty of the crime.

Another possible defense deals with how the police handle your contact and arrest. If the police were to search your home or your person without any probable cause that you are the person who committed this offense, your Ontario Criminal Defense Attorney can argue that they committed a violation of your Fourth Amendment Rights, and can file a PC 1538.5 motion to Suppress the evidence found as part of the unlawful search and seizure. Your case would not be dismissed, but if the item used for the shining of the light is taken through an illegal arrest, then that cannot be brought into Court, and your case would then likely dismissed without that lighter.

A criminal conviction can have a devastating impact on your life. You not only face the loss of your potential freedom, but your ability to work will be tainted with any kind of conviction on your criminal record. Our PC 248 Ontario attorney has successfully thousands of people in your same situation. A criminal conviction is not worth risking. Your initial consultation is free and we are available to answer your questions 24/7. Call the Inland Empire Criminal Defense today at 909-939-7126! Located in Ontario, CA.