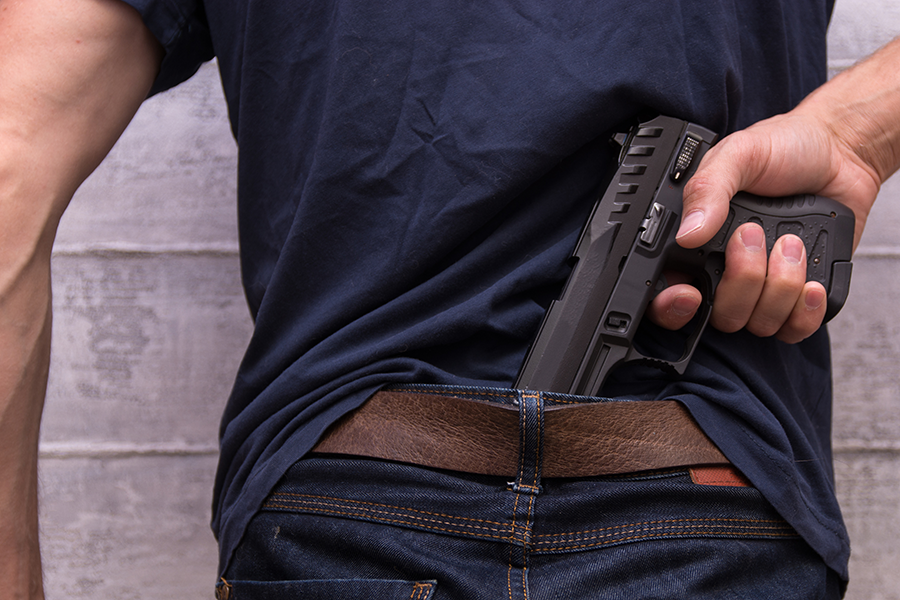 Legal Definition: “(a) Every person who carries a loaded firearm with the intent to commit a felony is guilty of armed criminal action.”

To be found guilty under PC 25800 the prosecution must prove that you intentionally:

A firearm is any device designed to be used as a weapon, from which a projectile is expelled or expelled through a barrel by the force of an explosion or other form of combustion. A firearm is loaded if the firearm and ammunition capable of being discharged from the firearm are in the immediate possession of the same person. A person carries a firearm when he or she has the firearm on his or her person or has it available for use in either offense or defense.

This can be any felony that you are intending to commit. A person carrying a firearm can be charged with armed criminal action if they are stopped short of actually committing the robbery, or of making an attempted robbery. It has to be a specific felony, for example, you cannot be charged under this section if you are armed while committing a DUI, since that is most often a misdemeanor offense.

A conviction under PC 25800 is a wobbler offense. This means you can be charged under this section as a misdemeanor or as a felony offense. Whether the charge is a misdemeanor or a felony depends on your criminal history and the specific facts of your case. A felony conviction under this section can send you to State Prison for upwards of 16 months, 2 or 3 years. You would be required to serve at least 50% of that time in custody. If you are convicted of a misdemeanor offense, then you can be sentenced to up to one year in County Jail. You could also be subject to fines and fees, a stay-away order from the area, as well as a loss of the firearm, even if you lawfully purchased it.

This is not a strike offense under the California Three Strikes law, and it is not a Sex Offense under PC 290. You could also face a loss of your Professional License if convicted, and if you are not a legal resident, you would face Deportation in Immigration Court since this offense could be considered an aggravated felony under Federal Law, it is a crime of moral turpitude and is a deportable crime because it involves firearms.

This charge requires that you knowingly possessed a loaded firearm. If you have an intent to commit a felony but did not knowingly have a firearm, you could be found guilty of this section. Imagine a scenario where a person places a firearm in your bag before you leave to commit a crime that you don’t know about. In that situation, there would be insufficient evidence to find you guilty of this crime.

Entrapment occurs when police, or their agents, encourage or promote the crime by way of their overbearing conduct. For example, if an undercover police officer entices you to commit a felony with a loaded firearm by repeat and insistent requests, or appeals to the sympathy or friendship to you, and you thereafter commit the crime as a result of the overbearing conduct, the police officer may have entrapped you to commit the crime. The idea has to be formed in the mind of the police, and not yours, in order to successfully use this defense.

A conviction under PC 25800 can have devastating impacts on your future, your job, and your immigration status. A conviction here can send you to prison, and devastate your future. Our Ontario PC 25800 attorney has successfully defended many people charged with firearm crimes including under PC 25800, and we can help you too. Call your local Ontario Criminal Defense Attorney today at the Inland Empire Defense 909-939-7126. Located in Ontario.