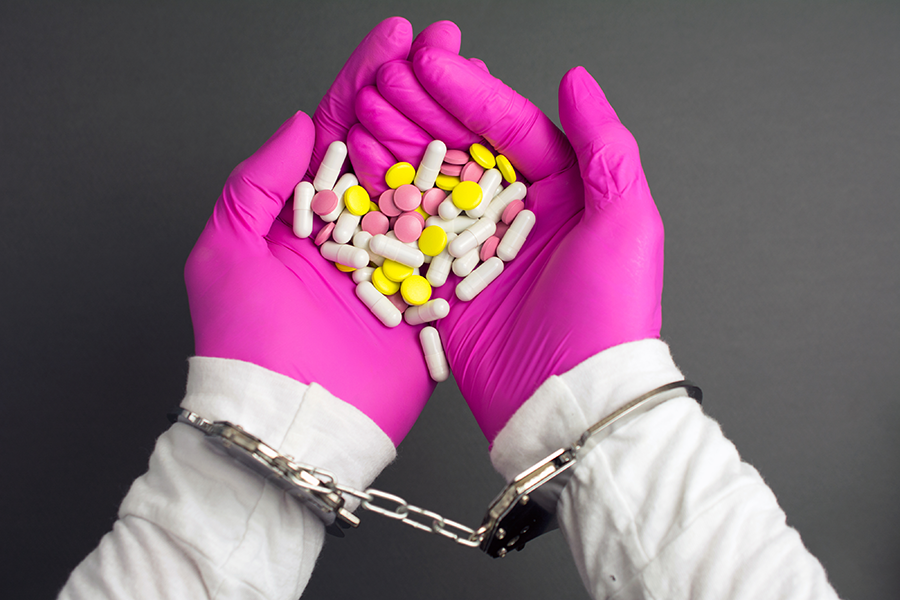 I. H&S 11154: Prescribing a Controlled Substance without Treatment

(b) No person shall knowingly solicit, direct, induce, aid, or encourage a practitioner authorized to write a prescription to unlawfully prescribe, administer, dispense, or furnish a controlled substance.”

To be found guilty under HS 11154 the prosecution must prove:

This section does not require an actual written prescription. For example, at a hospital, a doctor could prescribe a narcotic for treatment to a patient without diagnosing them, and they likewise are liable under this section. You can also be punished under this section for prescribing treatment to an animal (non-person) without the doctor having properly treated and assessed the patient. A controlled substance as defined here is a drug or chemical whose manufacture, possession, and use are regulated by the government.

This is not a strike offense under the California Three Strikes Law, and it is not a Sex Offense under PC 290. You could also face a suspension or loss of your Professional License if convicted, and if you are not a legal resident, you would face Deportation in Immigration Court since the offense is deportable, in that it is a crime of moral turpitude.

You cannot be found guilty of the charge if you can show you did a legitimate treatment plan to your patient. If the Prosecutor cannot show you the lack of a treatment plan, then they fail to establish a required element to convict you. Failing to show this, would be insufficient evidence as a defense, and your case would be dismissed.

Police can also work to sometimes coerce confessions out of you with overbearing police contact. This can happen if police are trying to force you into confessing that you intentionally were prescribing controlled substances to a person you were not treating. Police could promise leniency if you confess, which would lead to a violation and the ability for your Ontario Criminal Defense Attorney to argue that your confession should be thrown out of Court since police coerced it out of you.

A charge here can have a devastating impact on your life. As a physician, you will lose your license, and likely never be able to practice medicine again. All those years in school and school loan debt will be for nothing if you are convicted of this charge. Our Ontario HS 11154 attorney has successfully defended hundreds of people charged with illegal prescription crimes under HS 11154. Call your local Ontario Criminal Defense Attorney today at the Inland Empire Defense 909-939-7126. Located in Ontario.