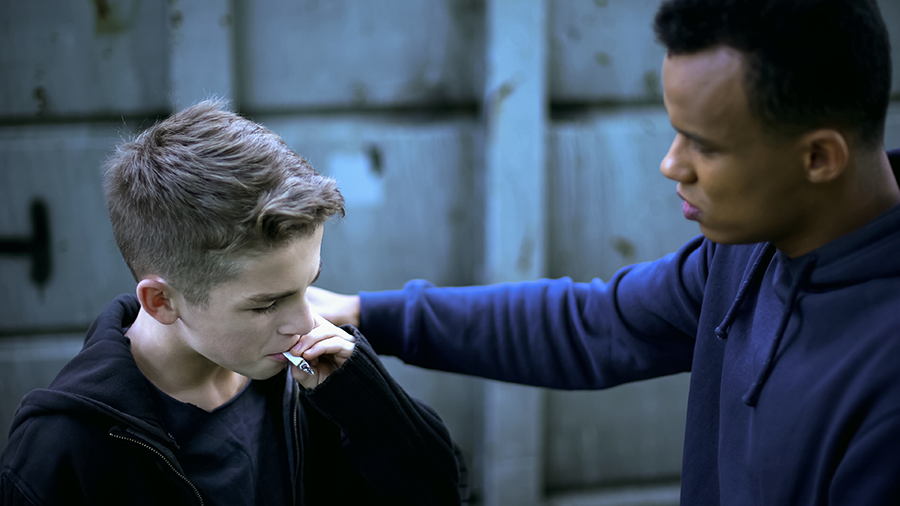 “(a) A person 18 years of age or over who hires, employs, or uses a minor in unlawfully transporting, carrying, selling, giving away, preparing for sale, or peddling any cannabis, who unlawfully sells, or offers to sell, any cannabis to a minor, or who furnishes, administers, or gives, or offers to furnish, administer, or give any cannabis to a minor under 14 years of age, or who induces a minor to use cannabis in violation of law shall be punished by imprisonment…

To be found guilty under HS 11361 the prosecution must prove:

Selling for the purpose of this instruction means exchanging marijuana for money, services, or anything of value. Marijuana means all or part of the Cannabis sativa L. plant, whether growing or not, including the seeds and resin extracted from any part of the plant. A person administers a substance if he or she applies it directly to the body of another person by injection, or by any other means, or causes the other person to inhale, ingest, or otherwise consume the substance.

You also can be convicted of offering to sell even if there is no evidence that you delivered or ever possessed any controlled substance. Although marijuana has now been made legal under Proposition 64, that only applies to adults, over the age of 21, who can purchase, possess, and the sale of marijuana. This does not apply to a minor who is prescribed medical marijuana by a doctor. This charge also applies to hire a minor to assist you if you run a marijuana distribution unit. Even if you hire the minor and do not pay them for their work, you can still be found guilty of this charge.

Even if you reasonably believe that the minor was over the age of 18 and not a minor, it cannot act as a defense for this charge, with the exception of “inducing” the minor.

As explained above, if you reasonably believed that the minor was over the age of 18, you cannot be found guilty under this section for inducing the minor. In this circumstance, a minor could provide you with a fake ID, they could lie to you about their age, and that would put you into a reasonable belief that the person was over 18. Many times people, outside busy bars or clubs, take time to smoke marijuana, and if a minor is using a fake ID to get into that establishment, they can just as easily make a person believe they are of age. It would be assumed if you saw the person inside of the bar, that they would be an adult, and if you induce them into smoking marijuana with you, that you are asking another adult. If your Criminal Defense Attorney is able to show that the reason why you tried to induce the minor to smoke marijuana, it can act as a defense to the charge.

Police can also work to sometimes coerce confessions out of you with overbearing police contact. This can happen if police are trying to force you into confessing that you knew the minor was a minor, when you didn’t. Police could promise leniency if you confess, which would lead to a violation, and the ability for your Ontario Criminal Defense Attorney to argue that your confession should be thrown out of Court, since police coerced it out of you.

A charge under this section can result in an unwanted criminal conviction and a lengthy stay in State Prison. Landing yourself in State Prison up to 7 years can also hurt your ability to ever own a firearm, or to ever be able to Expunge or Reduce your charges, therefore leaving a felony on your record for life. It can affect your future school, job, and residence if convicted under this section. Drug convictions also tend to make it more difficult to obtain professional licenses, even if the charge was something you received when you were younger, it is worth fighting for. Our Ontario HS 11361 attorney has successfully defended hundreds of people charged with drug crimes under HS 11361 Call your local Ontario Criminal Defense Attorney today at the Inland Empire Defense 909-939-7126. Located in Ontario.