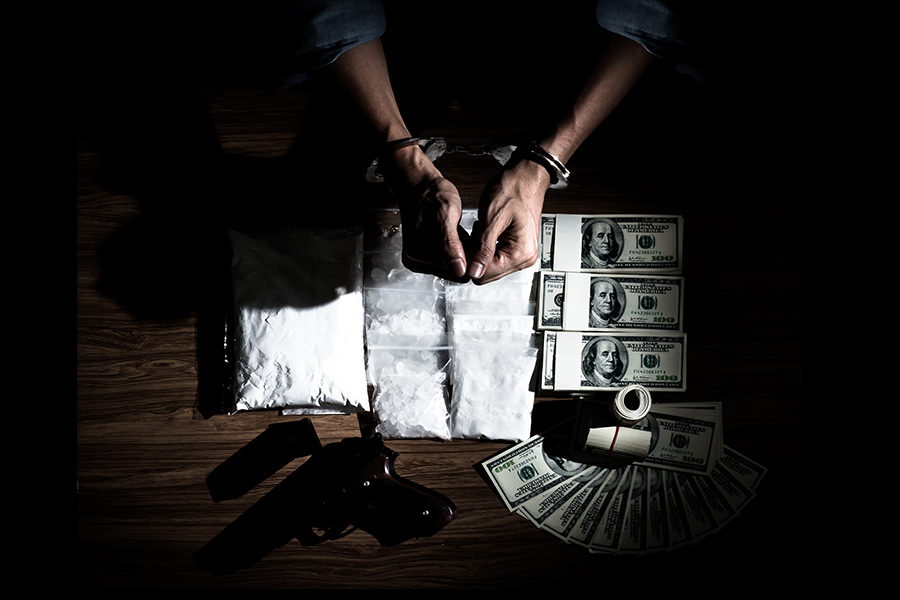 I. H&S 11370.1: Possession of Controlled Substances While Armed

To be found guilty under HS 11370.1 the prosecution must prove:

A ﬁrearm is any device designed to be used as a weapon, from which a projectile is expelled or discharged through a barrel by the force of an explosion or other form of combustion. Under the commonly understood meaning of the term ‘loaded,’ a ﬁrearm is ‘loaded’ when a shell or cartridge has been placed into a position from which it can be ﬁred, meaning if the shells or cartridges are stored elsewhere, then you would not have a loaded firearm for this charge.

Two or more people may possess something at the same time. You do not need to actually hold or touch something to possess it. It is enough if you have control/the right to control the item personally or through another person. However, if you simply agreed to purchase a controlled substance while armed does not, by itself, mean that you have control over that substance.

A charge under HS 11370.1 is a felony-only offense. This would mean there is no misdemeanor charge for this crime – a conviction can only result in a felony on your record. A felony leads to a firearm ban and a ban on voting, among other restrictions since this is a felony offense. A conviction of this charge you could be sentenced to State Prison for 2, 3, or 4 years. You are required to serve at least 50% of that time in custody. You would also be subject to a fine of up to $10,000 for a conviction.

This is not a strike offense under the California Three Strikes law, and it is not a Sex Offense under PC 290. You could also face a suspension or loss of your Professional License if convicted, and if you are not a legal resident, you would face Deportation in Immigration Court since the offense is deportable, because it is possible crime of moral turpitude and possibly an aggravated felon with the use of a firearm. It is also made to be deportable because it involves drugs.

Also keep in mind, even if you were to obtain an Expungement under PC 1203.4, this does not absolve your record of the felony conviction for this charge. An expungement will not remove the status of “felony”, thus you can still not own or possess a firearm even with an expunged criminal case.

Entrapment occurs when police, or their agents, encourage or promote the crime by way of their overbearing conduct. The idea has to be formed in the mind of the police, and not on the Defendant, in order to successfully use this defense. Here, an undercover officer could lure by pressure a drug sale to you, knowing you are armed. Once the transaction ends, and you have possession of the drugs, and you are armed, you can be arrested for a violation of HS 11370.1. If the contact is so outrageous to overwhelm and convince you to violate this section, the defense Entrapment would be available to that person to defend that, but for the police’s overbearing conduct, you would not have committed this offense.

Also, if you lack “knowledge” of the presence of the controlled substance. Simply possessing a firearm, and unknowingly having “possession” of drugs, maybe from another individual in your home, or in your vehicle when stopped by police, you can use your lack of knowledge as a defense. Failing to show that you had knowledge of the presence of the controlled substance would act as a defense – showing there is insufficient evidence to prove you guilty of the crime, and therefore making your charges get dismissed. Have an attorney able to argue the sufficiency of evidence can mean the difference between a dismissal and a felony on your record for life.

A felony conviction has devastating impacts on your future. It becomes a crime you must disclose to employers, it becomes a crime that forbids you from owning a firearm for life (doing so can lead to a charge under PC 29800), and can affect your voting rights. Our Ontario HS 11370.1 attorney has successfully defended numerous people charged with possession of a controlled substance while armed laws under HS 11370.1. Call your local Ontario Criminal Defense Attorney today at the Inland Empire Defense 909-939-7126. Located in Ontario.