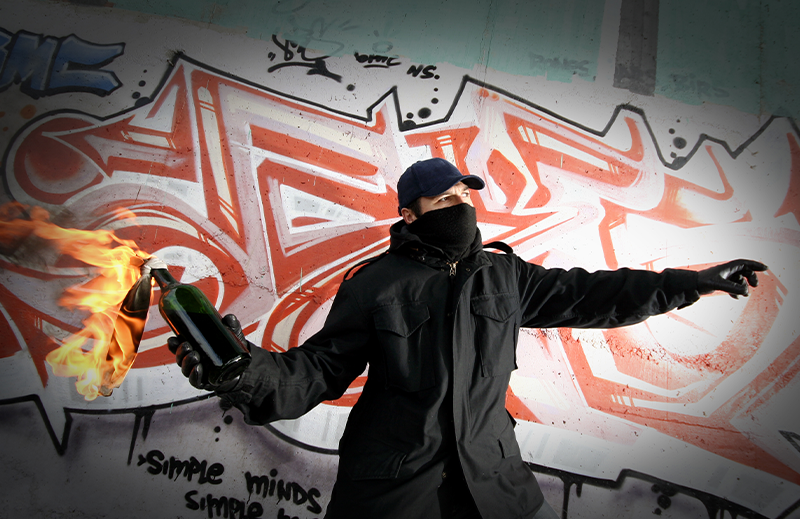 Legal Definition: Any use of force or violence, disturbing the public peace, or any threat to use force or violence, if accompanied by the immediate power of execution, by two or more persons acting together, and without the authority of law, is a riot (PC 404(a)).

For a person to be convicted of a violation of PC 404.6, the prosecution must prove the following:

2. You acted at a time and place and under circumstances that produced a clear, present, and immediate danger that a riot would occur/acts of force or violence would happen/property would be burned or destroyed;

3. When you acted, you intended to cause a riot.

Someone commits an act willfully when he or she does it willingly or on purpose. A riot occurs when two or more people, acting together and without legal authority, disturb the public peace by using force or violence or by threatening to use force or violence with the immediate ability to carry out those threats. To be guilty of inciting a riot, you must urge others to commit acts of force or property destruction. It is not enough that you’re simply present at the time a riot is already, or about to occur.

It is also not enough to simply be participating in the riot, such as throwing items at police or causing damage. Being a simple participant does not meet the elements of “urging” others to commit a riot. However, it is also not a defense if you intended to incite a riot, but a riot did not occur, or you failed to achieve your goal. It is enough to show here that you intended to incite a riot.

A violation under PC 404 (rioting) or PC 404.6 (inciting a riot) is a misdemeanor offense. If you are found guilty under any of these sections, you could be sentenced to up to one year’s days in County Jail. You would be required to serve 50% of that sentence. In addition to jail time, you could be subject to harsh probation terms, fines and fees, and paying for any damages for your rioting. You could also be subjected to Stay Away Orders from the Court, not allowing you to return back to the place, even if it is a business, in the future.

This is not a strike under the Three Strike’s Law. It is also not a crime of moral turpitude, but people in the United States on a temporary basis, or people with a professional license, can be looked down upon for a conviction under this section.

You cannot commit an act of rioting or inciting a riot by yourself. If you are in a room, by yourself there is no possibility a riot could start; simply because there are no other people. Understand also that a riot is different than something like a peaceful protest. There, you are peacefully demonstrating your disapproval of something or person. Rioting involves an aspect of danger, violence, burned or flipped over cars, or damage to shops.

A criminal conviction can be devastating to your life. It can affect your schooling, your job potential, and your earning potential. You could end up in jail, with heavy fines and fees, and an explanation when any employer pulls up your criminal record as to why you start riots in your free time. You need someone who can argue the elements of the crime and poke holes in the prosecutor’s case. I have handled many of these cases, and I can help you or your loved one have hope to get through these difficult times. Our PC 404 and PC 404.6 Ontario attorneys have successfully defended numerous cases involving Rioting and Inciting a riot under PC 404 and PC 404.6. The initial consultation is free and we are available to answer your questions 24/7. Call the Inland Empire Criminal Defense today at 909-939-7126! Located in Ontario, CA.