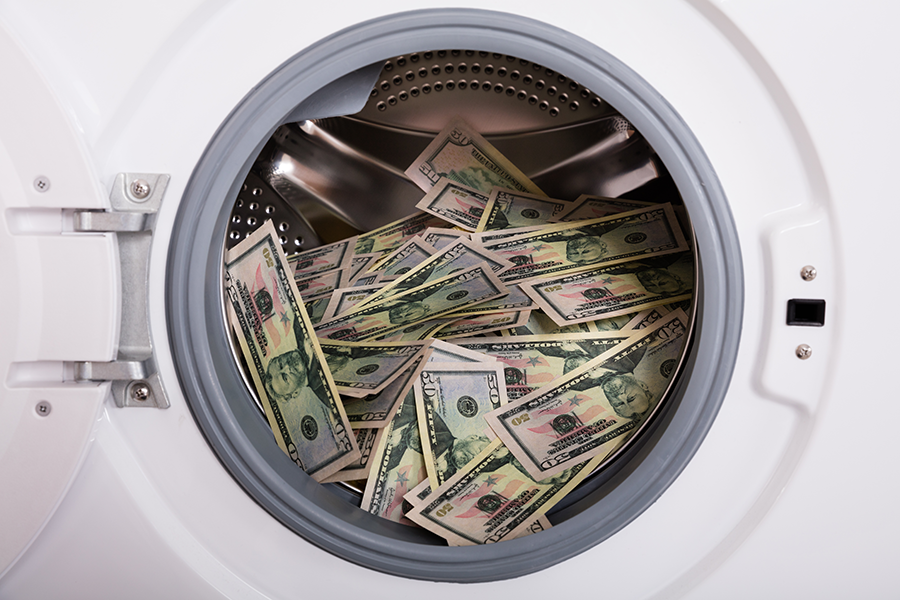 PC 186.10:  “A person commits the crime of money laundering when he or she conducts or attempts to conduct one or more transactions within a seven-day period involving a monetary instrument or instruments of a total value exceeding five thousand dollars ($5,000), or a total value exceeding twenty-five thousand dollars ($25,000) within a 30-day period, through one or more financial institutions (1) with the specific intent to promote, manage, establish, carry on, or facilitate the promotion, management, establishment, or carrying on of any criminal activity, or (2) knowing that the monetary instrument represents the proceeds of, or is derived directly or indirectly from the proceeds of, criminal activity, is guilty of the crime of money laundering, which can be punished as a misdemeanor or as a felony.”

In order to be found guilty of PC 186.10, the prosecutor must show:

Simply put, the law prohibits the public from channeling in the financial system large amounts of money or other valuable items obtained directly or indirectly through criminal activity.  Law enforcement doesn’t have the resources to investigate all financial transactions, so the law targets transactions involving at least five thousand dollars ($5,000).

Money laundering is a wobbler, which means that you can be charged with this crime as a misdemeanor or as a felony offense.  Whether you are charged with a misdemeanor or a felony offense, depends on the specific facts of your case, your criminal history, and the amount of the theft.  It also means that if the crime was initially filed as a felony, either party may request the judge to reduce the crime to a misdemeanor.  Each transaction that qualifies as money laundering counts as a separate offense. So if you commit this crime ten times, you can be facing 10 separate charges.

Other Consequences.  This is not a strike offense under the California Three Strikes law, and it is not a Sex Offense under PC 290.  However, a conviction for PC 186.10 could result in the loss of your Professional License, and you may also lose eligibility for some state and federal benefits.  Finally, if you are not a legal resident, you could face Deportation in Immigration Court since this offense involves theft, which is a crime of moral turpitude.

Whether charged as a misdemeanor or a felony, money laundering is a serious charge that will have devastating consequences on your reputation, may cost you a lot of money in fines, and might cause you to spend some time in jail.  This is why it is crucial that you immediately contact our PC 186.10 attorneys if you have concerns that you may be investigated for money laundering.  If charges have not yet been filed, we will immediately contact the assigned investigators and prosecutors to assess if law enforcement has sufficient evidence to even file charges, so that we may minimize the risks to your reputations, finances, and freedom.  You, or your loved ones, cannot take a chance on such a serious charge.  Our Ontario PC 186.10 attorney has successfully defended thousands of people charged with crimes throughout the entire Inland Empire. Call your local Criminal Defense Attorney today at the Inland Empire Defense 909-939-7126. Located in Ontario.