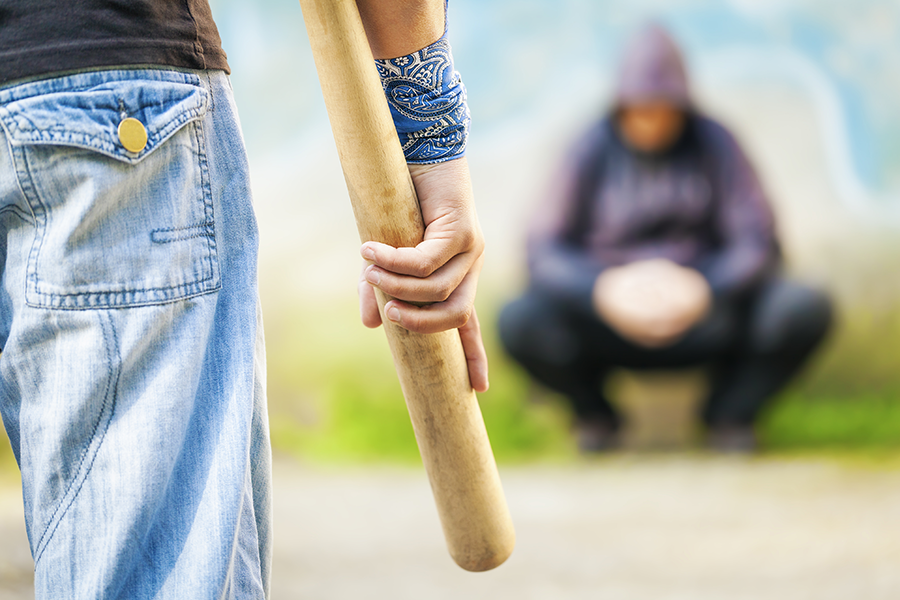 I. PC 17500: Possession of a Deadly Weapon with Intent to Assault

Legal Definition: “Every person having upon the person any deadly weapon, with intent to assault another, is guilty of a misdemeanor.”

To be found guilty under PC 17500 the prosecution must prove that you intentionally:

A deadly weapon can be obvious items such as a firearm or a knife, but it can also be something as simple as a bottle or a broom. There is no specific definition in California of what a deadly weapon, but it is typically based on the facts of each case. A broom, or a bat, if used in a way to attack another, can be considered a deadly weapon.

The difference between this charge and, for example, an Assault with a Deadly Weapon Charge, is that this involves simply holding the deadly weapon with the intent to use it, not actually using the weapon. If, for example, you are holding a bat in your hand with the intent to use it, the act of using it is what elevates it into Assault with a Deadly Weapon. If you do not go forward with an assault, then you would only be guilty under this charge. An assault is an attempted battery, so swinging the bat is what would elevate your charge.

A violation under PC 17500 is a misdemeanor offense in California. If you are convicted of this charge, you could be sentenced to County Jail for up to 180 days. You would have to serve at least 50% of that time in custody. You could also be subject to Criminal Protective Orders from the victim, as well as fines up to $1,000.

This is not a strike offense under the California Three Strikes law, and it is not a Sex Offense under PC 290 You could also face a loss of your Professional License if convicted, and if you are not a legal resident, you could face Deportation in Immigration Court since the offense could be considered an aggravated felony and is a crime of moral turpitude.

If you lack intent to commit the crime, then you cannot be found guilty of this charge. For example, simply holding an item in your hand during an argument, is insufficient to prove you were intentionally going to assault another person. Imagine a scenario where you are cooking for yourself, and get into an argument with your spouse. You are currently cutting tomatoes for a sandwich with a knife. So now, you are holding the knife while arguing – but that is because you are cooking, not because you are trying to assault your spouse. If the Prosecutor cannot show you had intent to assault, then there would be insufficient evidence to prove you guilty of the crime.

You can also be arrested for having a deadly weapon on you. But what if, you didn’t know the item was on you? During your interview with police, you could be coerced into confessing to knowing you had a deadly weapon on you, even if you did not actually know that. Generally speaking, a person who confesses to a crime that is forced out of them by police conduct, it would be inadmissible to be used against them in Court. This makes logical sense, if the police force a confession out of a person illegally, it should not be able to be brought into Court to be used against them. Generally, this can happen during police interrogations where police, believing they have their person, do whatever it takes you to make you confess. If you are coerced into confessing, your Ontario Criminal Defense Attorney can fight to have your confession thrown out of court.

A criminal charge has devastating implications for your future. You will struggle to find jobs, keep jobs, and future your earning potential with a record. That is what you could get if you do not take these charges seriously. These are defensible, and there is a way to even negotiate a reduction of charges to not only avoid custody, but to avoid a record. The elements of this charge are very subjective, meaning your attorney can easily fight this case for you. It all depends on who you hire. Our Ontario PC 17500 attorney has successfully defended and is well versed in man gun cases including PC 17500 cases in Ontario. Call your local Ontario Criminal Defense Attorney today at the Inland Empire Defense 909-939-7126. Located in Ontario.