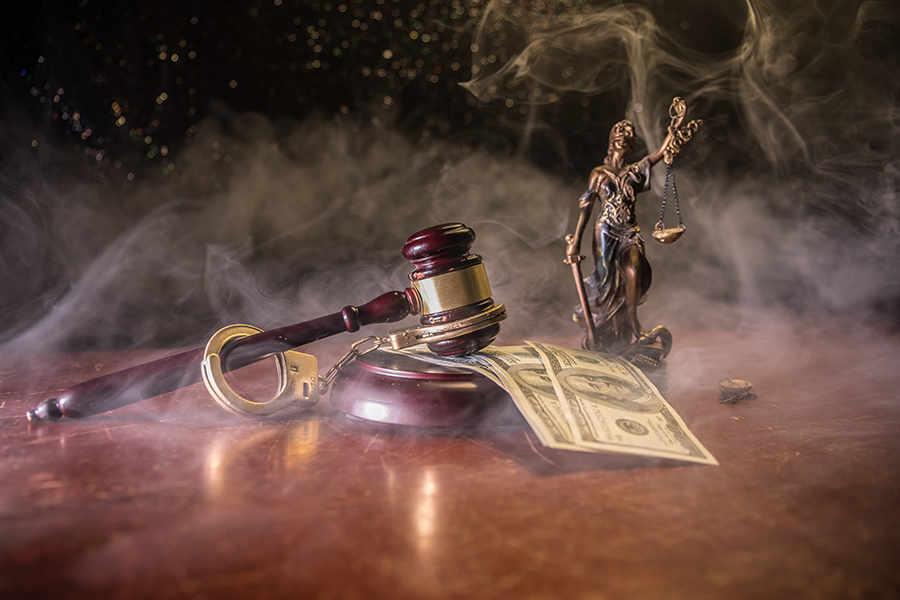 I. PC 95: Influencing a Juror or Judge

PC 95: “Every person who corruptly attempts to influence a juror, or any person summoned or drawn as a juror, or chosen as an arbitrator or umpire, or appointed a referee, in respect to his or her verdict in, or decision of, any cause or proceeding, pending, or about to be brought before him or her, is punishable by a fine not exceeding ten thousand dollars ($10,000), or by imprisonment…”

For a person to be convicted of a violation of PC 95, the prosecution must show that:

2. When you made the oral or written statement, you had the specific intent to unlawfully influence the victim’s verdict, decision, or other legal duty.

A “judge” in this context can be an actual Judge, a Commissioner, a Referred, an Arbitrator, and Umpire. A juror is the common definition of a person impaneled as a juror in a criminal or civil trial. This is broader than PC 92 which focuses on attempting to bribe, whereas here, a simple attempt to corrupt is a violation. This section also prohibits the use of threats, intimidation, and other forms of undue influence in addition to the use of financial corruption.

This section also defines what kind of communication is penalized under this statute:

An example of this is following a juror home in your pending criminal case set for Jury Trial, telling them if they vote guilty, you or your family will attack or physically kill that juror for that vote. This can be extended to a judge who is at a grocery store, is approached by a person who has a civil trial set in their Court. The person then offers to assist in the Judge’s election campaign that is coming up, knowing that it is intended to influence the pending civil trial.

A violation under PC 95 Influencing a juror or judge is a felony only charge. This means you cannot have this charge reduced to a misdemeanor during or after your case. This would also mean, a conviction for a violation under PC 95, would be a lifetime ban for you to ever own or possess a firearm. A conviction under this section can land you in County Jail for upwards to 16 months, 2 or 3 years. You would be required to serve at least 50% of that time in custody. You could also be required to pay restitution in the form of fines up to $10,000. This is not a mandatory Prison Sentence, and having an experienced Criminal Defense Attorney can possibly seek Probation, thus avoiding a lengthy Prison Sentence. Whether you are subject to State Prison or Probation, depends on the facts of your case and your criminal history.

This is not a strike offense under the California Three Strikes law, and it is not a Sex Offense under PC 290. You could also face a suspension or loss of your Professional License if convicted, and if you are not a legal resident, you could face issues in Immigration Court because this is a crime of moral turpitude.

Entrapment occurs when police, or their agents, encourage or promote the crime by way of their overbearing conduct. For example, if an undercover police officer entices a defendant to commit prostitution by repeat and insistent requests, or appeals to the sympathy or friendship of the defendant, and the defendant thereafter commits the crime as a result of the overbearing conduct, the police officer may have entrapped the defendant to commit the crime. The idea has to be formed in the mind of the police, and not on the Defendant, in order to successfully use this defense. If you are entrapped into this charge, it acts as an affirmative defense to the charges.

Also, you could have also simply given a present to the Judge, not with a corrupt intent, but to thank them for the job they are doing. If the present does not influence the Judge, and you lack the corrupt intent to commit that crime, then you would not be found guilty under this section. Instead, there would be insufficient evidence to prove you guilty of the charges. Same can be said if you made an angry statement to a juror or judge, without the specific intent to influence their decision making in your case. Your Ontario Criminal Defense Attorney could argue this for you at your Preliminary Hearing or at Trial, in order to get your case dismissed.

A violation under PC 95 is heavily prosecuted in California because DA’s believe it attacks the truth of the legal system. Failing to find a proper defense can land you in State Prison for up to 3 years, mandatory deportation if you are not a resident, and loss of your 2nd Amendment Rights to own a Firearm for life. Our Ontario PC 95 attorney has successfully defended numerous people charged with influencing a juror under PC 95. Call your local Ontario Criminal Defense Attorney today at the Inland Empire Defense 909-939-7126. Located in Ontario.