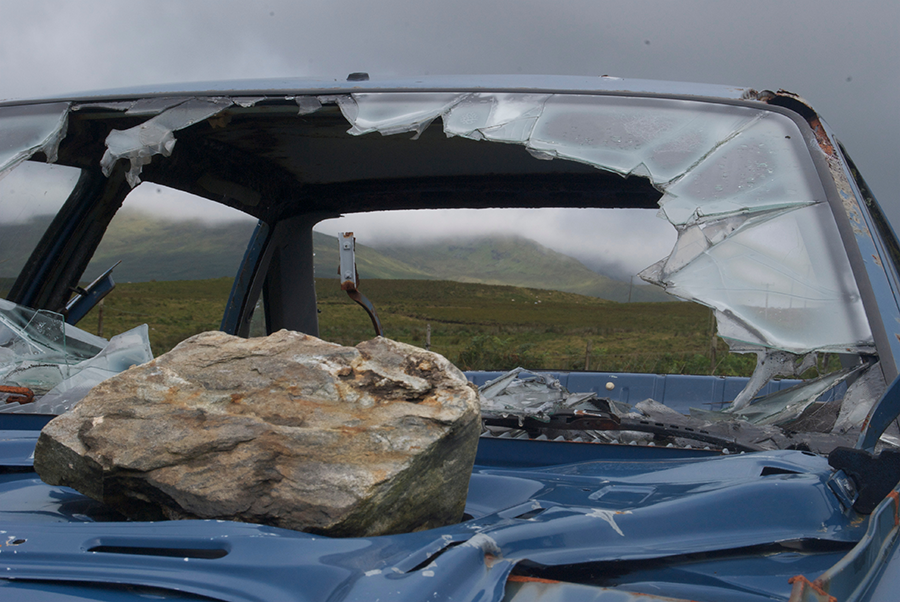 (a) Any person who throws any substance at a vehicle or any occupant thereof on a highway is guilty of a misdemeanor.

(b) Any person who with intent to do great bodily injury maliciously and willfully throws or projects any rock, brick, bottle, metal or other missiles, or projects any other substance capable of doing serious bodily harm at such vehicle or occupant thereof is guilty of a felony and upon conviction shall be punished by imprisonment in the state prison.

A motor vehicle is any vehicle that is self-propelled. The highway is defined as any road or another place that is publicly maintained and that is open to the public for travel. It is not important if the item is thrown is being thrown at a car that isn’t moving, or what item you are throwing. So long as an item is thrown, you would be guilty under this charge. You fall under (b) when it involves the specific items listed with the intent to cause great bodily harm.

Imagine high school kids, throwing rocks off of an overpass, onto cars passing by. In that scenario, it is likely you are not trying to cause great bodily harm to anyone, but you are still violating subsection (a). To do something maliciously means that you did the act of throwing the object with the intent to harm someone or do a wrongful act. To do something willingly means you did that on purpose.

A violation under VC 23110(a) is a misdemeanor offense. If convicted of this charge as a misdemeanor, you could be sentenced up to six months in County Jail. You would be required to serve at least 50% of that time in custody. You could also be fined up to $1,000 for a conviction under this section.

However, if you are charged under VC 23110(b), you are charged with a felony. If you are convicted of this section, you can be sent to State Prison for 16 months, 2 or 3 years. You would be required to serve 50% of that time in custody. You’d also be subject to a fine of up to $10,000, as well as Restitution to any victim you actually injure.

If you never intended to cause great bodily injury upon throwing the object at the motor vehicle, then you would not be guilty under (b). Failing to show your intent, would mean there is insufficient evidence to find you guilty of the crime. Under (a), if you didn’t intend to even throw an object, but it by accident fell, then there would be insufficient evidence to find you guilty for that section.

False accusations are not technically considered a “defense” in criminal law. In essence, the defense of false accusations comes from a person who falsely blames you for a crime you did not commit. Here, a driver can say the item thrown onto their vehicle came from you, but they can be mistaken. Your criminal defense attorney can then argue that the person is falsely accusing you of a crime, which can then act as a defense for a dismissal of your case.

A criminal conviction can be devastating to a person’s life and reputation. A charge of Throwing Objects at a Motor Vehicle under VC 23110 can land you in jail for up to six months, or up to 3 years if you intended great bodily injury. It can also lead to serious professional and immigration consequences if not handled properly. Our VC 23110 Ontario attorney has successfully defended numerous cases involving throwing objects at a motor vehicle under VC 23110. The initial consultation is free and we are available to answer your questions 24/7. Call the Inland Empire Criminal Defense today at 909-939-7126! Located in Ontario, CA.