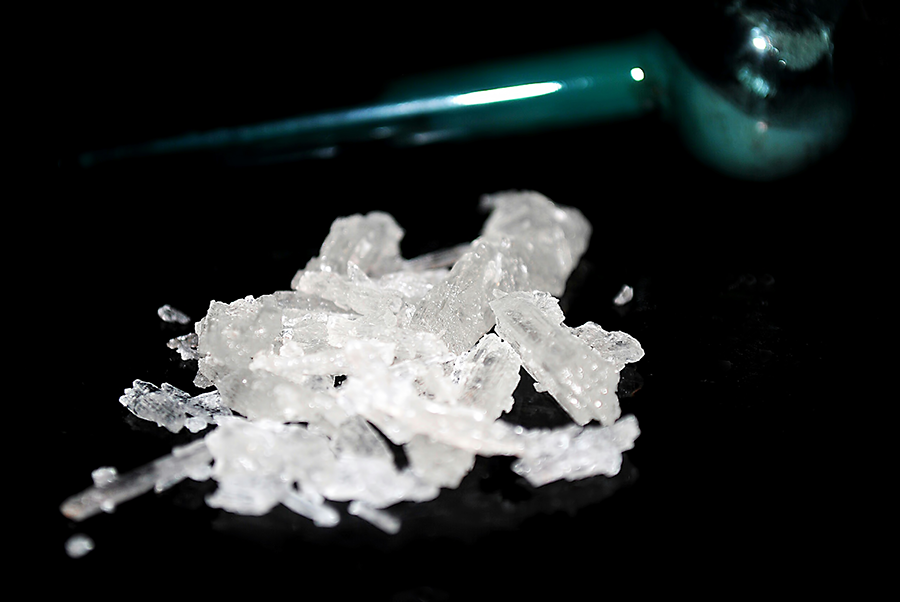 To be found guilty under HS 11377 the prosecution must prove:

2a. You knew that you were in possession of methamphetamine;

2b. You knew that the item you possessed was otherwise a controlled substance;

3. There was a sufficient amount of the methamphetamine to be used as a drug by a person, not simply residue or trace amounts of it present.

A usable amount is a quantity that is enough to be used by someone as a controlled substance. Useless traces or debris are not usable amounts. On the other hand, a usable amount does not have to be enough, in either amount or strength, to affect the user or get them high. Being able to get high from the amount present is not a requirement under this charge.

You must have had knowledge either that the drug was crystal meth or that it was a controlled substance that you had possessed. So in other words, there are two forms of knowledge, if the item itself, and of the contents of what the item is. A person does not have to actually hold or touch something, to possess it. It is enough if you have control over it/the right to control it, either personally or through another person. Agreeing to buy a controlled substance does not, by itself, mean that you have control over that substance. Two or more people may possess something at the same time.

The difference between this and Methamphetamine Sales under HS 11378, involves several factors such as the quantity, whether there are receipt books, tiny baggies, the presence of drug paraphernalia as well statements you make to police.

A charge under HS 11377 is a misdemeanor offense other than as described below. If you are convicted of this charge you could be sentenced to upwards of six months in County Jail. You would be required to serve at least 50% of that time in custody. You could also be subject to a fine up to $1000 for this charge. In addition, all methamphetamine present would all be confiscated by police as part of their investigation and likely destroyed.

You can be charged with a violation of HS 11377 as a felony charge only if you have a previous sex crime conviction or a conviction for a serious offense, such as Murder, among others. If you’re convicted of this charge as a felony, you can be sentenced to State Prison for upwards of 16 months, 2 or 3 years. You would be required to serve 50% of that time in custody.

A common defense that can be used for this violation is if the possession of methamphetamine was done so lawfully by you. This can only happen if you are lawfully prescribed that medication. In addition to this, the amount you possess has to be consistent with the prescription you were given. For example, if you have 10 pounds of meth, and are prescribed 8 ounces only, that would be inconsistent and unlawful possession.

If you do not know that the meth that was found on you was in fact meth, or did not know if the presence of the drug, such as a friend leaving it in your vehicle or in your bag before a police search, then you could not be found guilty of this charge. Failing to show your knowledge of the drug’s presence or that it was in fact a controlled substance (whether meth or otherwise), would mean that there is insufficient evidence to prove you guilty of this crime.

Another defense can be if police violation your rights against an unlawful Search and Seizures. This can happen if police were to enter your residence without a warrant or probable cause to search for the meth. This can happen if you are unlawfully detained, or a search is done without a warrant or an exception to the warrant requirement. A violation here would allow your Ontario Criminal Defense Attorney to file a Motion to Suppress Evidence under a PC 1538.5 motion to get the evidence suppressed and thereafter it cannot be used against you in your case.

A charge under this section can result in an unwanted criminal conviction that can last a lifetime. It can affect your future school, job, and residence if convicted under this section. Drug convictions also tend to make it more difficult to obtain professional licenses, even if the charge was something you received when you were younger, it is not worth it to not fight for. There is potential for other results here, such as possibly getting your case dismissed through diversion or something other than a conviction, but speak to your Ontario Criminal Defense Attorney about this first. Our Ontario HS 11377 attorney has successfully defended hundreds of people charged with drug crimes under HS 11377 Call your local Ontario Criminal Defense Attorney today at the Inland Empire Defense 909-939-7126. Located in Ontario.