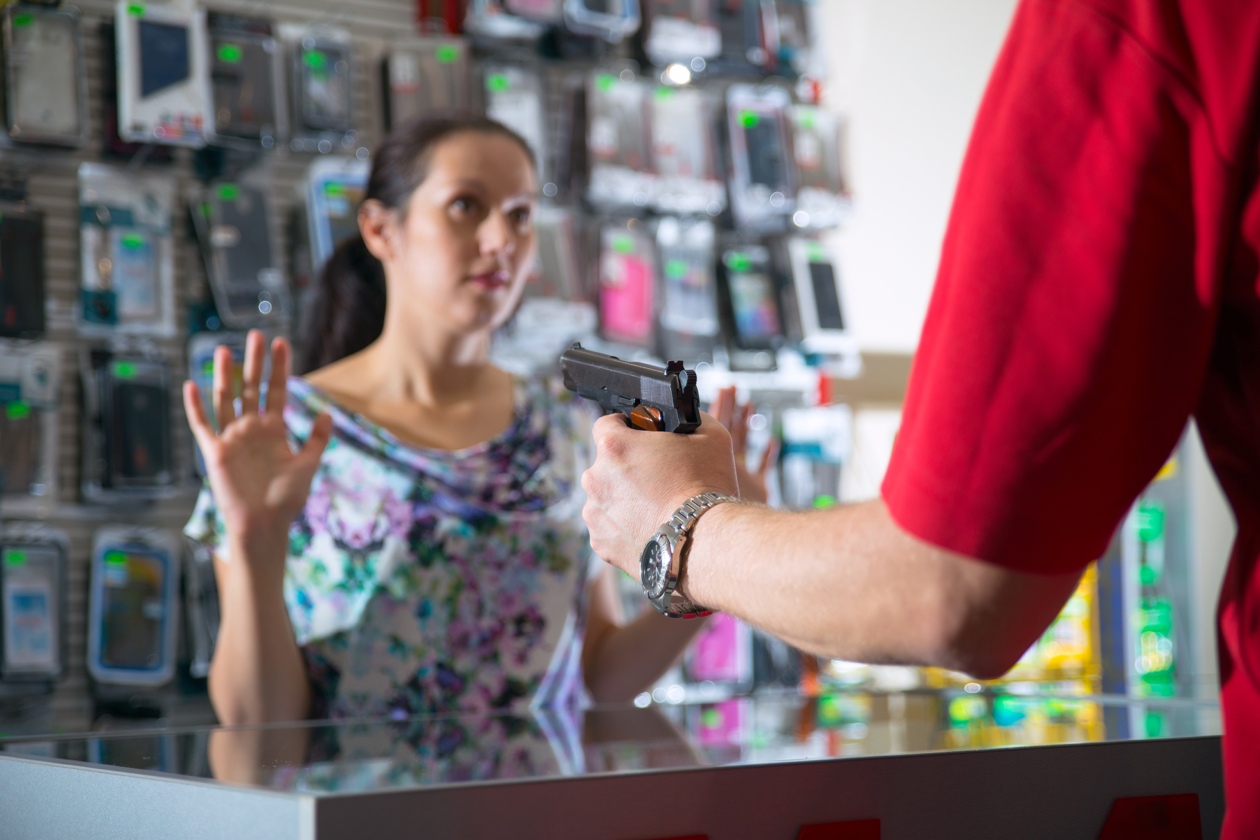 Legal Definition: Robbery is the felonious taking of personal property in the possession of another, from his person or immediate presence, and against his will, accomplished by means of force or fear.

For a person to be convicted of a violation of PC 211 the prosecution must prove the following:

Robbery can either be first degree or second degree.

All other robberies that are not defined in the above two sections are considered Robbery in the second degree.

Robbery is simply the idea of taking something that isn’t yours, by force, with the intent to never return this item. Most commonly this can be seen through purse snatching or when someone mugs another on the street. Although these are common examples, the value of the item taken is irrelevant. If you take a person’s wallet and they have no money in that wallet, it is still a robbery.

The intent to take the property must have been formed before or during the time you used force or fear. If you did not form this required intent until after using the force or fear, then you did not commit robbery. Property is within a person’s immediate presence if it is sufficiently within his or her physical control that he or she could keep possession of it if not prevented by force or fear. An act is done against a person’s will if that person does not consent to the act. In order to consent, a person must act freely and voluntarily and know the nature of the act. Generally, though, a person does not consent to ever being robbed, outside of role-playing.

Fear, as used here, means fear of injury to the person/injury to the person’s family or property/immediate injury to someone else present during the incident or to that person’s property. The force required for robbery must be more than the incidental touching necessary to take the property. For example, someone who picks your pocket, without you ever knowing, would not be considered a robber under this section, but they could be charged with Petty or Grand Theft.

In addition to this, if you are sentenced to State Prison, you will be unable to every expunge your record under PC 1203.4. Because of this, unless you were to receive a Governor’s Pardon, you would never be able to purchase a gun legally and would be restricted from voting, as you would be a convicted Felon for life. Because robbery is considered to be a violent felony, if you are sent to prison, you will not be eligible for early release on parole under the new Proposition 57 laws.

In addition, this being a violent felony charge would affect Job prospects and will mean any person in the United States on a temporary basis will be subject to immediate Deportation Proceedings upon a conviction, either during their time in custody or upon their release. That means you could serve your sentence in prison, and then immediately be released into ICE custody, where you would face Deportation proceedings.

If a person honestly believes that he or she has a right to the property even if that belief is mistaken or unreasonable, such belief is a defense to robbery. This would be considered a “Claim of Right” Defense to robbery. If you are walking through a department store, and you cannot find your purse, but see another person with an identical purse and then attempt to grab and take that purse – so long as you reasonable belief that it was your purse, you cannot be convicted of robbery.

And many times in these cases, where the robbery took place at a 711 or so, identity is very hard to establish. Obviously, if you do not wear a mask, or wear gloves, or have your getaway car outside with the plates visible; then you’re going to be caught. But many times this can be an issue. Also note, if you have a getaway driver, that person cannot say they did not go inside the store, and thus cannot be guilty of the robbery. If you are present at the scene, even if you do not go inside, but aid and abet the others, then you are guilty of Robbery as well.

Another defense could be a “Mistake of Fact”, where you are under the belief that the victim had just robbed another person, and you, in turn, robs them of that item, to return it to who you think is the rightful owner of that property. This could be a comedy of errors type of situation, where a person claims some person stole their wallet, and you, trying to be a hero, stop them, and take the wallet back, or so you think. In reality, that person just dropped their wallet, and the person you stopped was an innocent passerby who you have now mistakenly robbed. However, that would not be a robbery under those facts.

As the above information notes, this is an extremely serious offense, where you could face many years, even the rest of your life in State Prison. Not only this, but a Strike will double any subsequent felony arrests you may face in the future, thus putting most of your life behind bars. This is not a joke of a charge that any person should mess around with, or one in which someone can just take their chances with a Public Defender. If you want to have any hope of ever getting out of jail, having a future, and living your life, you need to call an experienced Robbery Attorney to help you or your loved one through this. I have defended many of these, and use the examples above as real life examples of cases I have successfully defended. Our Robbery Ontario attorney has successfully defended numerous cases involving Robbery crimes under PC 211. The initial consultation is free and we are available to answer your questions 24/7. Call the Inland Empire Criminal Defense today at 909-939-7126! Located in Ontario, CA.