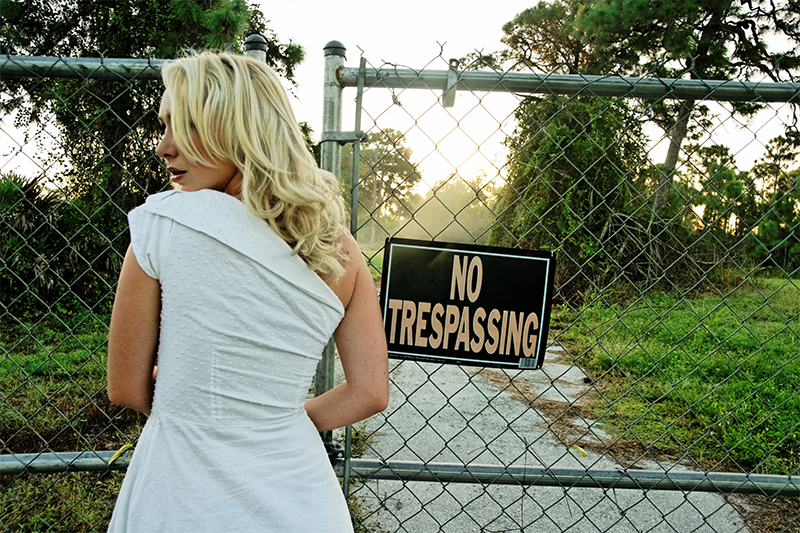 Legal Definition: There are several different subsections of Trespassing, depending on where you are at the time of the trespass.

To show that you trespassed, it must be shown that you entered upon property without the owner’s consent to commit an illegal act, or that you remained on the property after being instructed to leave the property.

PC 602(a): Cutting down, destroying, or injuring any kind of wood or timber standing or growing upon the lands of another.

PC 602(k): trespass with intent to interfere with a business.

PC 602(m): trespass to enter and occupy a property.

PC 601(a): trespass with the threats to cause serious bodily injury.

The basis of this charge is to avoid people being on a property that is not theirs, without the owner’s consent. The need for a crime like this is to avoid much bigger, worse crimes, such as someone trespassing with the intent to commit a Burglary (PC 459). If police stop you while you are on the property without the consent of the owner, they can always arrest you for trespassing, even if you have further, evil intentions to commit a worse crime.

This can also commonly happen in a store that is open, where management for whatever reason, asks you to leave the premises. If you refuse to then leave the store, you could then be arrested for trespassing, even though the business is open to the public.

In addition, a business or person could file a Criminal Protective Order, requesting the Court to order you to stay away from their premises, also known as a “Stay Away” order, which prevents you from returning to that property. If you choose to violate that Criminal Protective order, you could be charged with a Probation Violation as well as a new criminal offense under pc 273.6.

It is important to note that simply being on-premises doesn’t necessarily mean that there is a trespass crime occurring. You must also be there with the intention of committing an unlawful act, such as Vandalism on the owner’s property.

In addition, if you are being chased by a madman, wielding a knife, then it would only make sense you would have the ability to run into a closed building, without the owner’s consent. There, you are not committing a trespass, firstly, because you are not there to commit an unlawful act. Secondly, you are there out of necessity, such that if you did not trespass, you would otherwise be murdered.

Trespassing may not sound like the most serious crime, but it can be easily defended if you hire a good attorney. Further, the collateral issues, such as a Restraining Order, could lead you to more and more law violations, all based on this one conviction. In most counties, there is the potential to avoid a conviction, even in the face of overwhelming evidence, through Diversion type or DEJ Programs that I have used many times to save my clients from a conviction. Our PC 602 Ontario criminal defense attorney has successfully represented and protected numerous clients in defending against Trespassing charges under PC 602. The initial consultation is free and we are available to answer your questions 24/7. Call the Inland Empire Criminal Defense today at 909-939-7126! Located in Ontario, CA.