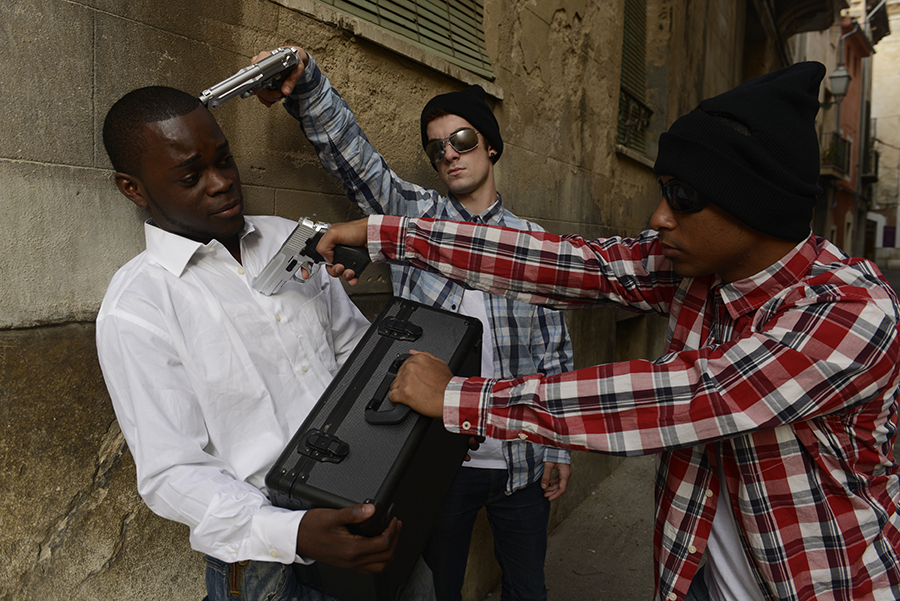 Under California law, there are two separate criminal offenses for gang cases, there is the action of actively participating in a Criminal Street Gang, and also an enhancement for committing crimes in furtherance of that gang.

Legal Definition: (a) ”Any person who actively participates in any criminal street gang with knowledge that its members engage in, or have engaged in, a pattern of criminal gang activity, and who willfully promotes, furthers, or assists in any felonious criminal conduct by members of that gang, shall be punished…”

(b) “any person who is convicted of a felony committed for the benefit of, at the direction of, or in association with any criminal street gang, with the specific intent to promote, further, or assist in any criminal conduct by gang members, shall, upon conviction of that felony, in addition, and consecutive to the punishment prescribed for the felony or attempted felony of which he or she has been convicted…”

For a person to be convicted of a violation of PC 186.22, the prosecution must show that:

a. directly and actively committing a felony offense; OR

b. aiding and abetting a felony offense.

At least two gang members of that same gang must have participated in committing the felony offense; you can be included as one of those two participants. Active participation means involvement with a criminal street gang in a way that is more than passive or in name only. It isn’t enough to simply say you are a member of a gang, that by itself would only be passive. It means that you are party to criminal activity for the gang, and the crimes you do are for the purpose of making the gang look good, or gain street cred.

A criminal street gang is any ongoing organization, association, or group of three or more persons, whether formal or informal:

In order to qualify as a primary activity, the crime must be one of the group’s chief or principal activities rather than an occasional act committed by one or more persons who happen to be members of the group. A pattern of criminal gang activity is generally at least two or more crimes from the above list, one two or more separate occasions with two or more people, that take place within three years of each other, and at least one crime was committed after September 1988. Typically these kinds of crimes can be things such as Robbery, Murder, and Assault with a Deadly Weapon, among many other offenses. What is interesting as well, it doesn’t need to be proven that the offenses you committed were even gang-related, only that they are a listed crime above, and fall into the gang definition above.

You can also be charged under this section if you aid or abetted in the commission of a felony that you didn’t personally commit. You cannot be charged under these sections if you commit a crime alone, it must involve one or more gang members for this to be a crime.

Convictions for participating in Criminal Street Gangs are Strike offenses under California’s Three Strike Law. Keep in mind, that if your underlying offense is also a strike offense, such as Robbery, then you could face an additional strike on your record. This would have severe implications on people trying to Immigrate to the United States as well as people trying to obtain Professional Licenses. This is not a Sex Offense under PC 290 unless the underlying crime is already a sex offense that requires registration. In other words, a conviction for the gang enhancement will not make you register as a Sex Offender, but the offense charged with the enhancement can be one.

If you are not convicted of the underlying offense that the gang enhancement is attached to, then you cannot be found to have done that crime for the benefit of a criminal street gang, as there would be no crime in that circumstance. In other words, the enhancements must follow an offense, so dismissal of the offense, dismisses your charges AND enhancements.

You can also argue that you are not an active gang member, but a passive member or friend. In many circumstances, people involved in gangs have friends and family who are not members but who may have friends that are in gangs. Being a friend of a gang member does not make you an active participant. An experienced gang lawyer can argue your participation was only passive, and therefore there is insufficient evidence to prove you guilty of being an active participant in a criminal street gang. Note, you must be an active participant in a gang to be found guilty under PC 186.22(a), but you need not be shown to be an active member of a gang to commit an act in furtherance of a criminal street gang under the enhancement charge of PC 186.22(b).

You cannot be found guilty of the gang enhancement if you are not committing a crime for a criminal street gang. Though many prosecutors assume every gang member commits all horrific crimes, it is not always the case. Two brothers, who happen to be apart of a gang, who commit a robbery to help their family afford rent. Maybe their family lost their jobs and livelihood during the Covid-19 pandemic, or going back to the Housing Market Crisis in the mid-2000s. Doing this, is not for the benefit of the gang, but rather, for the family. So even if you are a member of a gang, and the gang has committed crimes, and it is an offense listed above, it doesn’t prove you did it for the benefit of the gang. Having an experience Criminal Defense Attorney can argue there is insufficient evidence to prove you guilty of this offense, because you did the crime not for the benefit of a gang, but for your family. Here, getting the enhancement dismissed or dropped, can be lifechanging in terms of the exposure a person can face in their criminal case.

Gang crimes are very complicated, and extremely heavily prosecuted all through Southern California. That is why they have their own sections to penalize people in gangs, and people who commit crimes for those gangs. Those enhancements, are added consecutive to the main crime you were arrested for. Being able to have the enhancement dropped can be the difference between a short time in prison, and a decade or longer away from your loved ones. Our PC 186.22 Ontario attorney has successfully defended numerous cases involving gang charges and gang enhancements under PC 186.22(a) and PC 186.22(b). You, or your loved one, cannot chance to ruin your life. The initial consultation is free and we are available to answer your questions 24/7. Call the Inland Empire Criminal Defense today at 909-939-7126! Located in Ontario, CA.